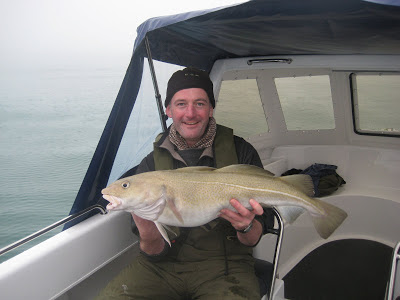 My good mate Dave has started his own blog.
http://ahookinmytrousers.blogspot.co.uk/2013/01/jupiters-moon_8.html

I have a theory about sea sickness in that I'm sure it's a psychological matter. I only get sea sick on other people's boats and, it can be a regular occurance.On my own boat, I'm absolutely fine whatever the sea conditions. I put this down to being in total control of my destiny and my subconcious is telling me that, if i feel a bit 'iffy',I can just head home anytime I want. Its my decision.I would never do this when crewing on other's boats.
I also believe that it may be because, on my own boat, i'm always busy and my mind is kept occupied. I've been keen to get my good mate Dave out boat fishing for some time.Dave formerly ran the Sussex Police boat angling club until, about 15 years ago, he suddenly developed sea sickness.I did get him out bream fishing the season before last but,although he was reluctant to admit it at the time(I'd be the same),he turned a bit of a funny colour when it bumped up a bit. Recently however, I've been pestering him to see a hypnotherapist friend of his who claimed she could possibly cure him.
Today , in perfect sea conditions(look at the picture),we headed out in search of cod, initially trying mark 3 where we were plagued by pout dogs and channels, then after a short and encouraging radio conversation with my mate Brian, relocating five miles further on mark 11.
Here, in addition to the usual suspects up came a couple of small conger until finally this rather nice looking 12lb cod( Jupiter's first) took a fancy to Dave's whole squid-mission accomplished...............
and the sea sickness? O'k it was a flat calm day and the fishing 'busy' with virtually a bite a drop but, I do believe my mate has been cured.
His enthusiasm is certainly regained with talk of buying his own boat gear and more trips out in the future.