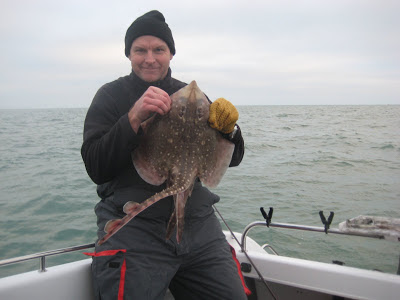 All of my trips in 'Jupiter' so far have been solo for various reasons. I wanted to spend some time getting acquainted with the boat before taking anyone with me and also, the opportunity to bring someone along , despite a long list of requests which is flattering,hasn't really presented itself.
Today however, Russ came along for the ride and it was immediately apparent how much better the boat was balanced laterally, with 'two up'. The extra weight was barely noticeable, and i would imagine that three could fish quite comfortably with a little bit of discipline.
Neil has got 'Spirit' on dry ground whilst he fits his boat with a matching pair of new, and quite impressively huge and equally impressively named,Ford 'Sabre' diesel engines.I'd met up with him yesterday at the marina and of course the conversation turned to fishing.
We concluded that the 'best bet' for today's outing was, once again, to persevere with the 'tail' as there have been several good cod taken from the mark recently, although the 'going' has been tough.
Today wasn't any different.
Yes, we got a steady stream of dogs, pout, strap conger and channels but as usual, no 'greenbacks' although Russ did haul up a small spotted ray.The sea state wasn't that kind either and , in the relatively deep water the 'pick' repeatedly slipped .It's possible that I might need to up an anchor size to 7.5kg which i'm researching at the moment however, I'm not the only boat to experience this problem on this mark.Today Alex's ex ride,a Fastliner now owned by Juan-'Two Chances' failed to get a grip at all and left for shallower waters, and on my next trip out, Brian on 'Marruig' will also suffer from the same problem.
In the end and,feeling rather disappointed that i hadn't been able to give the mark a fair crack, I decided to give up and bump our way 'inside' skimming the chop at about 17kts, something I'd never be able to do in my little Orkney.
Settling at #23, we had similar results until slack tide produced a take from something with a bit of 'weight', which turned out to be the thornback above, to finish off the day.
Back on the pontoons and most of the other boats had fared similarly, with the exception of  one,who had rather caned some impressive blonde rays-more of which later.