Scooby was out of the water again this morning whilst Andrew finished off the repairs to the gel coat. The results are very good and he's managed to get a decent colour match despite white being a very difficult shade to work with.
At the same time I was fitting a service kit to the carburettor which will hopefully solve an over fuelling problem which I've been experiencing of late. By lunch time all was finished and I was able, with a little help from Jan, slide her back in at the slipway and head straight out to sea to make the most of the calm conditions.
First job was to bag up on mackerel , both for bait,and for tea. The feathers didn't take long to do their job.
When I arrived at the mark #40, there were too many boats in attendance for my liking so I elected to anchor up at Alex's mark by which time the ebb was beginning to push. Big baits today. Half mackerels on 6/0 viking and 8/0 circle both ends of the fish being tried in an attempt to trap some bass.
Fishing was a little slow at Alex's although, along with a doggie, a double figure undulate turned up so i'm not complaining.Most of the boats had left #40 by the end of the afternoon to make the bar but, with Alan on Walrus still about to keep me company, I moved into position for the last of the ebb and the 'hot' period for bass -over the low water.
After a few bumps and knocks , i soon had my first run.These bass are particularly prone to dropping the bait if they feel any significant resistance so I set the Avets with the clicker on, and just enough drag pressure to hold the line against the flow.As soon as a take is suspected the drag is fully released, the clicker disengaged, and the bass allowed to take line under gentle thumb pressure with a 'strike', or when using a 'circle' just a gentle tightening occurring just a few seconds later.
It seemed to work quite well  and i don't think I missed any takes. The first bass up was a modest fish of 5-04, followed shortly by a very lively upper double figured tope which gave me a tremendous scrap on the 8lb class rod,and an equally tremendous scrap when I foolishly tried to wrestle the thing on board by tailing it at the side of the boat with my free hand.The intention was to try for a self take shot but,the cockpit battle didn't last too long, the tope thrashing it's knashers a bit too close to my bare toes for comfort, before being quickly released back into its own environment.
At slack water things went quiet but picked up again as the boat settled and the water began to move again.Next fish up was a better bass ,this time at 8-08 followed very quickly by another nice fish at 7-12 to complete a hat-trick of the intended quarry,all three fish fighting extremely hard and taking line on some pretty spectacular dives  when within netting range.
The  fish were tethered at the side of the boat on the 'Grip' whilst the self takes were set up and consequently held in the same manner until fully recovered, which did take several minutes.It was quite a sight seeing them immediately dive for the depths on releasing the trigger grip-a good piece of kit.
Finally another double figure undulate took a mackerel head to complete a very productive session indeed.By the time the tide had picked up pace, the bites dried up and being 9-00p.m and with enough water over the bar, it was time to head home into the sunset.
I've struggled recently fishing live baits for bass and Clive, a seasoned boat basser, has also mentioned that during the main summer period, he finds them just as challenging, even choosing to switch to alternative species to target.
I'm not convinced that live baits wouldn't have worked today, but I'll never be sure.It's certainly a lot easier to settle down at anchor and fish dead baits and perhaps this is a more successful method at this time of year. Clive puts forward the theory that there is plenty of available food about which is why the lives fail. There are certainly an abundance of bait fish(mackerel) on the reefs.
Alan, Ted and Alex all pick up bass through the summer on these 'old school' and simple methods and they've had decades of experience at the game.
I also can't quite understand why the period around the turn of the tide produces instead of the usual main tide run.but it would seem to be the case and apparently I'm not alone in experiencing this. 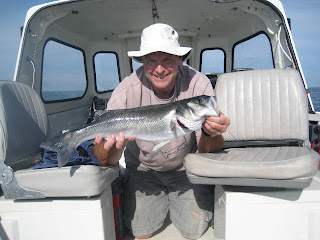 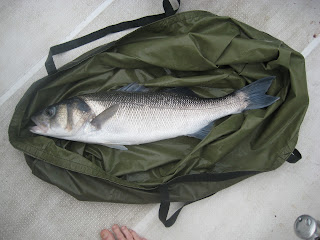 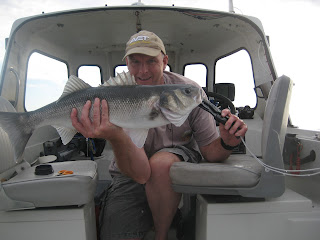 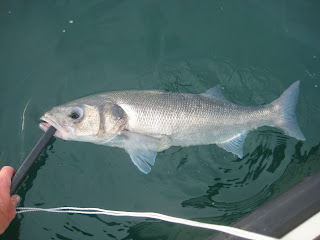 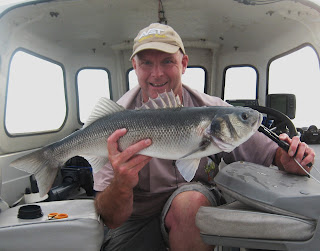 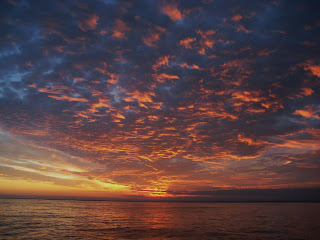