I was back out on the river this evening for a short two hour session before dinner attempting , once again , to tempt a mullet. The recent cold and wet weather seems to have 'put them  down' somewhat and, although there are plenty showing up in the marina, fewer seem to be about in the main river.

The rain hasn't really coloured up the water too much yet, but there is plenty of evidence of its effect up stream notably, the large rafts of debris that are gradually working their way down to the harbour.
I tend to spend more time searching for fish, than actually fishing on sessions like this and this one was no different.
The first small groups of fish that i located were easily spooked, disappearing quickly into the murk. Nearing home time, and almost accepting that i was about to blank, i stumbled across a couple of fish on one of the shallow 'points' and just as the tide was nearing slack low.
After trotting the float down, they too appeared to disappear, but persevering, a subsequent trot produced a definite bite.-they were there! Last chance!
Three or four runs down later, and i finally had a second bite that was positive enough to hit, and connection was made.Keeping the rod down low to prevent the mullet from splashing and disturbing the swim, she was eventually beached upstream of the take zone- a plump fish of about 2 1/2lb. 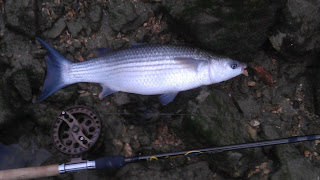 The following cast, now in virtually still water, immediately produced a bite, sadly missed but, time was pressing, dinner was waiting, and i'd had my fish anyway. Time to call it a night-a successful outcome.