HW 0733 4.5m
0800-1700   Generally I fish from the boat on my own.I quite like the complete solitude, and also it gives me a chance to experiment and not feel under pressure to put crew 'on the fish'.However, there is a growing list of people who have asked to come out for a trip, and it made a nice change today to be able to take my mate Dave Nevatt out for a long promised first outing in the hope of sampling some of the bream fishing we have over this side of the county.Dave's more used to pulling out bar-be-cue bream from his 'end' and indeed, Dave's Club, the Hove Deep Sea Anglers'  record for the specie is a mere 3lb. But then, over here, we have 'The Kingmere' reef system.
I'll admit to being rather nervous about the prospect of taking Dave out. After all he's fished with the best of them-Wilson, Lewis and Plummer,among others, and for species as exiting and exotic as Cauvery mahseer,Ebro cats and Nile perch. Would a cold and gloomy day out in a mucky sea after the humble black bream make the grade, I wondered.
It was a last minute decision to go, and a night before Invite, but Dave seemed very enthusiastic and jumped at the chance to come along.It was raining quite heavily at the marina when we set off at 8-00 am.My original plan was to head for the usually quieter western reef marks but, because there were no other marina boats out, and most of the big charters were still in port, i decided to head for the Kingmere and mark #12.I couldn't really take a 'guest' anywhere else could I!
Sure enough , when we arrived at the famous mark, there was only one other boat 'Lynander' in the general vicinity and during the day only Neil in 'Spirit' and my new marina neighbour Alan in 'Walrus' turned up to join in.
Despite the small tide size the quality of fishing was excellent. The bream fed steadily both for the remainder of the ebb, and the majority of the flood and we soon lost count of the numbers we were catching.Also pleasing was the general size of the fish.Dave secured a new PB with one of 2-10,whilst i managed several over the two pound mark with 2-14,and 3-00 being the best and very few of those bar-be-cue fish showed up.A smoothound, strap conger,ballan wrasse, dogs and big pouting also graced the boat deck and by the afternoon, the 'gloom' had passed, the wind had completely died down, leaving us basking in some welcome sunshine.
Dave was extremely impressed with the fishing and when I suggested that it was time to go home, insisted that we stay until the bites dried out.Eventually they did, and I managed to drag him back to port screaming  at about 5-00pm. As usual, we were the last boat to leave the mark.I even managed to convert my crew member over to our 'stuffed big hook' method enhanced by some of Malcolm's new huge floating beads which seemed to work very well. 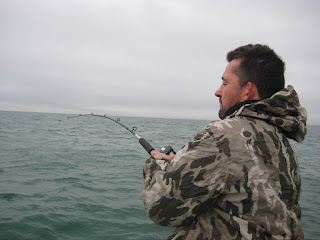 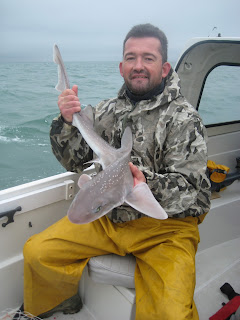 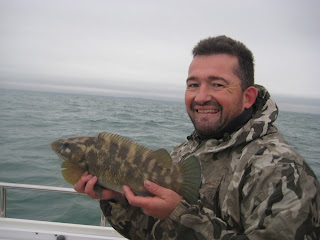 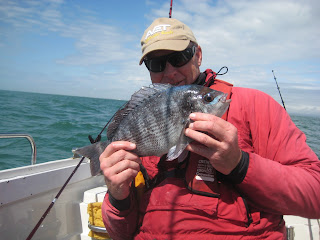 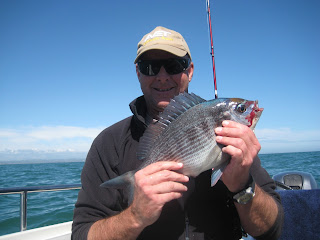