Fishing, and messing about with old motors........what could be better.

Jack came up from Devon for the week -end and we spent Saturday 'Land Rovering' , and Sunday was dedicated to a spot of fishing in the boat.
The 'Landie' is now stripped down to a rolling chassis having had the remainder of its panels removed and stored in the corner of the back yard.It all came apart relatively easily on the day ,despite forty odd years of rust binding each nut and bolt, and will allow me excellent access to the work that is required. There are four main areas of welding to be done on the chassis-the two front spring mountings although still fairly solid, will need replacing along with a side member and a bit of patchwork to the rear cross member-not too bad considering.
The 'heart' of the Land Rover-the steel bulkhead, through which practically everything which makes the truck go and stop goes is now stripped bare and residing in the luxury of my garage awaiting it's own bit of welding magic. These panels are fearsomely expensive to buy as a replacement, so it's worth spending some time and effort in restoring an original and, from what I can see, on this particular example, although the corrosion is quite severe, it's all repairable.
As far as dismantling goes- that's the end of it.From now on it's all repair, refurbish and build up so I suppose you could say we've reached something of a turning point in the project but, of course, there's still a long way to go.All being well it should be finished (up and running)by the time I retire in two years time!
Sunday's fishing was some action packed breaming on both ends of 'The Ditch' . We soon lost count of the fish caught- many of a good size-he's a big fellah so he makes fish look small but those bream are well into the 2-3lb bracket.The weather was kind and it was terrific fun just being out there with 'the boy'.Great stuff. 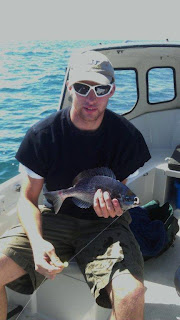 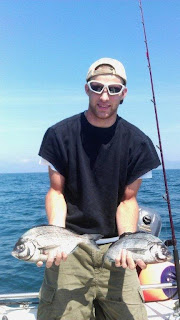 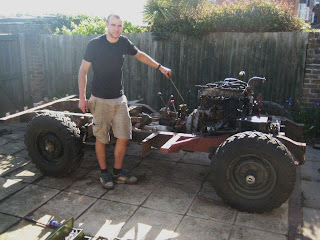