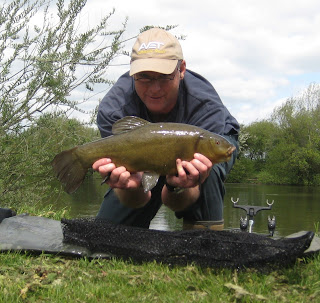 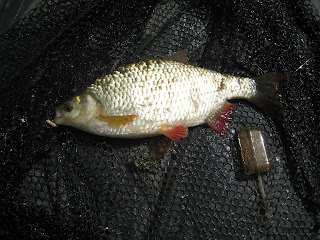 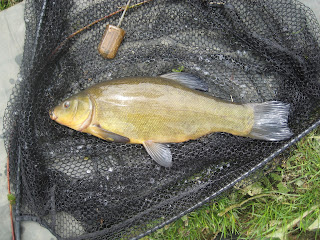 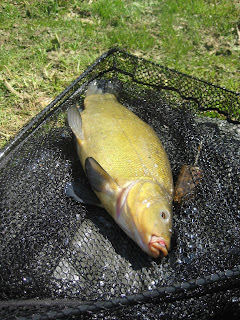 Last night I spent an unsuccessful couple of hours trying to extract a bass from quite decent surf on the beach at the back of my house with Andy and Simon to keep me company.
A short afternoon return trip to Deep Lake Chichester today however,proved to be quite productive  ....and not before time.It would seem that this year's tench fishing has finally kicked off having been held back by the seemingly endless rain and low air temperatures.
I selected a pitch in the SW corner of the lake, sending one bait forty yards out into the middle adjacent a patch of lillies,and another into a margin swim approximately ten feet from an overgrown bank.Tactics again, were 'bolt feeder' maggots on both outfits though I suspect that in future, due to the general shallow nature of these pits,I'll be getting the float rod out, just for fun.
The brighter and warmer weather seemed to work its magic and before long, a drop back bite on the margin rod produced the first fish  of the day weighing in at 5-14- the biggest tench i've had for some time.
At the moment I'm reading 'Big Tench' by Rickards and Webb borrowed from Dave W's extensive collection of classic angling literature. Penned in 1976 , a time when, as a teenager, I was doing quite a bit of coarse fishing, it is interesting to note that, In those days a tench of this size would have been considered to be quite a specimen. Indeed, at that time, Barrie Rickards,despite being a bit of a tench expert , had not caught a 'six'.
How times have changed. Nowadays, nobody bats an eyelid at such a fish and a ten pounder would be needed to merit a report in the angling press.Several theories have been put forward as to why some coarse species have increased so much in weight in recent years from the use of high protein baits by anglers, to agricultural nutrients seeping into our water systems but, whatever the cause, it's effects are quite dramatic. I've recently heard of the bream record being broken with a 'dustbin lid' twenty pounder!
As the afternoon progressed, so did the bites.Liner's became quite common indicate fish moving around the feeders  and soon enough,up came my second tench  ,also  from the margin swim- a plucky 3-08, followed shortly after by a screaming run on the distance rod and a really hard fighting 4-08 to complete the hat-trick. A couple of small 'silvers' had also put in an appearance, but the last fish of the day was this pleasing rudd at 1-05 to round off the session, and a very pleasent afternoon's fishing.
I think I'll spend a bit more time chasing these tench when I'm unable to use my boat,at least until the mullet start to show in numbers on the Arun. They're handsome fish , put up a good scrap and, as far as I know, the population in these very mature pits is pretty much an indigenous one.