Dave and me had another unsuccessful day last week chasing the tench at Chichester Pits' 'Boat Lake'.It rained ALL day long, was very cold, and we didn't get a touch between us.Not good.
Its still April (just), and the temperatures haven't exactly been soaring of late, which would probably switch the tench on, but today, there was a little  glimmer of hope with a dry, and mostly bright day with air temperatures hovering around 15deg-I fancied my chances.
I started around midday and , selected a smaller, and more sheltered pit to target-'Deep Lake'. Swim choice was dictated more by the direction of the chilly Easterly wind and my own comfort, than anything else and I picked a shallow corner with a sunken tree, and the beginnings of a lily bed to target.
Rigs were semi-fixed  maggot feeder with a size 12 on a 10cm hook length. Baited with one floating imitation maggot and two real maggots giving  the rig neutral buoyancy.Apparently, this makes a difference. Proper hi tech stuff!!
A pair of 'mullet' rods were paired with my 'new' Okuma Salina (saltwater) mini baitrunners.Carp fishing in miniature.
First impression of the new reels is very favourable but, they've got a lot to live up to.My last 'mullet' fixed spools -a pair of Shimanos are nine years old and only just beginning to show some wear.Hopefully, I'll be sixty before i need to buy any more.
The feeders were refilled every 30 minutes and cast to exactly the same spots to try and build up each swim.Dave and me have both wondered why the maggot rigs don't attract more attention from silver fish-if indeed there are any present.Well, it would appear that there are at least some as a small roach was soon to be found attached to one of my hooks.
Throughout the session, there were short bursts of, what I can only assume, were 'liners' and eventually a proper take materialised resulting in this rather nice male weighing in at 5-01-a result at last.
There were a few more tentative line bites but no more fish materialised and,by about 5-00 p.m the temperature had dropped, and the sky was looking decidedly 'ominous' so i called it a day.A very pleasant afternoons' fishing in the sunshine and finally,a start to the tench campaign. 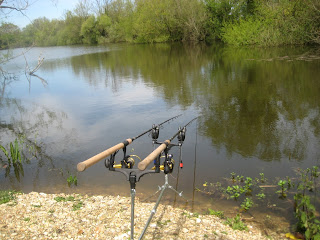 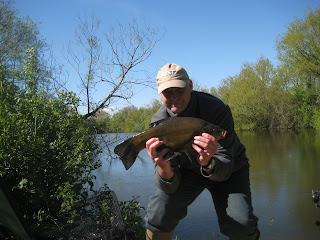