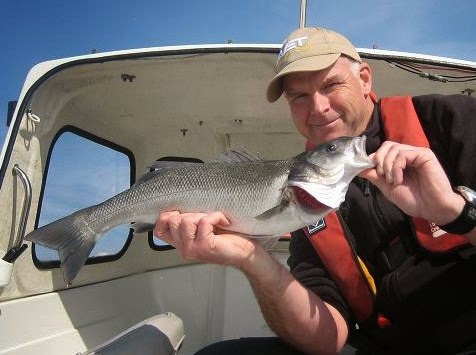 I started the day by heading over to mark #6 just in time to catch enough water at the entrance at 9-00, and with a view to progress the live bait method   for bass. The mark was deserted which meant that I could drift away to my heart’s content, and give the area a thoroughly good ‘sounding ‘in the process.
The smallish tide, at the time slacking off towards LW    didn’t make accurate, and repetitive drifts very easy and I was also surprised by the SSW direction of the flow over the mark  .
Bait fish ( I was after herring) were proving to be elusive so, I decided to hedge my bets a little by attaching a ‘Norden’ instead of a weight at the end of the Sabikis.
The first take, however, was not from a bait fish, but instead a good bass hit the lure .I managed to get her to the surface and get a really good look but unfortunately, the inevitable happened. Just as I was reaching for the net, she decided to take a strong dive and the rig parted just above the lure.
I was devastated. I’m not saying the fish was a double because that would just upset me more so, let’s just say it was a goodly bass.
I can only blame myself. Sabiki rigs are not tied up with very strong line even in the main rig, and in future, i should really make up my own from something like 20lb amnesia. I’m sure it wouldn’t affect their ability to catch.Luckily the ‘Norden’ was only fitted with  a single circle hook .
Very little happened , as usual on the slack, but as the flood picked up speed(relatively) I managed to catch a small pouting and out went the live bait float rig .It took a few drifts before a take eventually came and really, the taker matched the sized of bait it was presented with- a modest fish of 3-04 which was taken for the pot. At least the method worked once again and this time gave me a chance to try out the camera’s self timer.
A few more fruitless drifts were  attempted , apart from some more pouting and a whiting on the feathers, and then I decided to move over to mark#5 for a few equally uneventful passes before calling it a day.
On reflection, I’m actually quite pleased that I managed to trap some bass on what was not ideal tide timing, and it was certainly useful to thoroughly map mark 6, and get a better idea of what is on the sea bed at 5-knowledge is everything.
It would have been easy to give up and wander over to #12 where several charters were picking up bream which seem to be showing up in good numbers now.
More experience and know how might also have sent me in the direction of mark 4( good on smaller tides) for some turbot , brill and big mackerel baits, stopping off at #6 on the way home when the tide would have been ebbing nicely to pick up a double figure bass!
HW 1729 4.9m
0900 - 1600