Dave's been really busy of late and we've not fished together for some time, so It was great to finally hook up with my mate for our usual end of season pikefest on P.A.S waters.
I hadn't returned to Washingham since catching 'Hattie' (it would seem that as well as mud grovellers, pike are also attracting silly names)for fear of tangling with the big old girl again. However, Dave's location suggestion seemed like a good idea, and anyway,in reality, the chances of actually catching her a third time were pretty slim. She was probably miles away.
Water and weather conditions were perfect, a clarity and warmth respectively,that I'd not seen or felt for a long while.
We started at the bottom bend where Dave had a small fish of about five pounds on his sardine, and I matched him with a similar fish on roach just upstream of the sluice shortly after.Gradually we moved along the bank,  and it was whilst setting up after a rod hop, that my other float ,50yds down stream again on roach,had disappeared.By the time I reached the rod it was bucking violently and the ratchet on the 6501(I'm using multipliers now) was clicking away.
Tightening up, the fish immediately felt strong, fresh and of a certain satisfying size.18lb she went, cleanly hooked as usual and rewarding us with a nice little show for a minute or two as she sulked in the shallows before powering off.I don't THINK i've caught this one before.LOLShe looks long and slim in the picture but photography can be deceiving.She'was actually quite broad and plump and it's just the angle of her body that is hiding her true dimensions.
The bait was relatively unmarked,  so was cast back out to the same spot to try and find a sister,kept company by my sardine baited rod which was returned briefly to aid the cause.
Minutes later Dave, who had successfully completed his upstream manoeuvre, was bending into his own decent fish which had snaffled a sardine, and turned out to be another good double at 16 1/2 lb.
We wiled away the remainder of the day sitting static,selling Harleys on the mobile phone, and basking in glorious sunshine in 'Hattie's ' swim, but neither she, nor any of her cronies put in a further appearance.
Meanwhile over in the east of the county on the Cuckmere river to be precise, hot news from Jon Cook was that he was bagging up with an amazing haul of fifteen pike including five doubles. He had to stop fishing as he'd ran out of live baits! That boy's on fire this year.
Nothing could steal our thunder however and by Arun standards, it was a grand day out..
On the wildlife front-hares and ravens put in an appearance today. 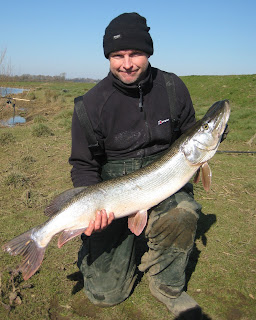 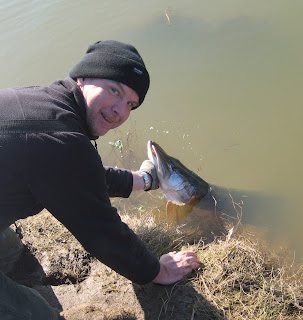 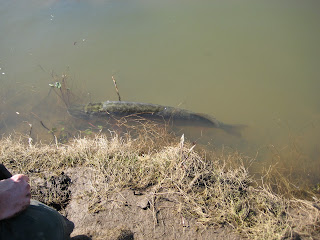 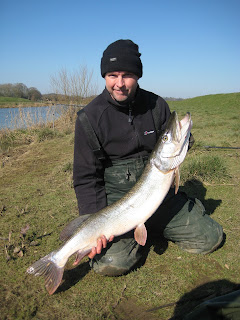