I couldn't fish yesterday because I  had to pick up my new bike, but Dave did get out and had a blinder.Two big doubles on dead baits, both takes coming at opposing turns of the tide. We've now had so many big pike at tide turns that it must surely be more than just coincidence. Time of day seems to matter little.Traditionally, dawn and dusk are cited as 'hot' feeding times for pike but we've not found this to be the case.Our pike seem capable of appearing at any time of the day even during that 'dead' early afternoon period.
We have experienced  feeding spells, with multiple captures in short time slots often , distanced quite far apart, but they've not been that common.'Hot spots' and 'lairs' seem not to exist on the river, unless we've not come across them yet (hopefully)and I can safely say that neither of us have had more than two fish consecutively from an individual swim.
So where does this leave us.It seems that the tide is our only guide and today this, yet again proved to be the case............but only with half of our catch.
Conditions ,of course, matter a lot.The past three days of warm dry weather, with that all important sunlight, seemed to have worked in our favour, and has definitely stirred the pike into action and got them feeding.Today, however, a strong south westerly was ripping across the river, but it remained comparatively mild, and despite some rain,the clarity was still there.
Overall, deads have done almost as well as lives which backs up the theory that they've been 'up for it'.The pike have also proved to be very lively when hooked.One of Dave's fish yesterday took a full five minutes to get to the net.
Although we've never been able to figure out where they are spawning in the immediate area, due to there being no obvious sites evident (unlike in the upper river) , It's apparent that they are. We're taking some heavily gravid fish, along with some spent.
I had to work last night so joined in the fun around 9-30 a.m and within minutes of casting my half mackerel was taken, I connected, felt a thump , and then she was gone.An hour or so later  I had better luck, and just managed to land,(one hook of the bottom treble was in the pike's lower lip),a scraper double on sardine.Once netted the hook just dropped out.
Dave's double(10-08) also on sardine, came just as we were packing up at 4-00p.m coinciding with the top of the tide and completed another successful, by Arun standards, session.In fact the last few days have probably provided us with the best pike fishing we've had on the river for some time, making up somewhat for the hard season we've had generally. 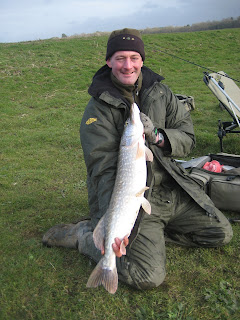 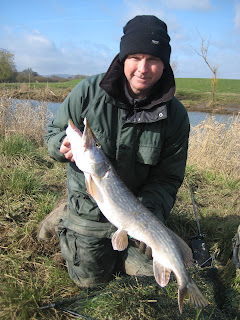