Its always a bit of a wrench when the end of the traditional coarse season arrives, and with it the end of another winter's piking on the rivers. But, It also signifies the beginning of another year's sea fishing and the promise of 'T' shirt and shorts weather.
I'd originally intended to take my dinghy up to Brazier's Hangar but it looks like this will have to wait until next season . Instead , I chose to bank fish at Parham, mostly because I felt confident It would produce, but also because, due to it's remote nature, I felt it the least likely place I'd meet any other 'last day' anglers.
Apart from a herd of cattle which meant that me and the dog had to avoid the first stretch I did indeed have the river to myself-not another soul in sight.This meant I could fish three rods and hop them about ten yards at a time every 20 minutes, which meant each bait had an hour to do it's work. I've found this system to be very successful and must cover all the pike on a given stretch.Whether they choose to feed or not, is another issue.
I started at the half way sluice and within minutes a tiny pike had grabbed the tail of my roach bait and, though not hooked, decided to hold on all the way in to the shallows. I found It highly amusing watching the little fellah hang on doggedly.A few minutes passed, and then another slightly bigger pike had a go at my second bait on the retrieve.....but also let go. Finally after a third missed take-almost certainly another jack, I decided that the place was infested with tiddlers and moved upstream.
Things did quieten down for a while enabling me to get a brew on, but it was not long before another small critter snaffled my precious roach bait , and suffered the consequences by being successfully lifted from the water.It made a pound if It was lucky.
Having 'wasted' three of my precious baits,(I can't say I didn't enjoy the fun of tangling with these ;little jacks) I decided to mix it up a bit with sardines and continue moving upstream.
Eventually the first decent pike of the day arrived, actually as far up as Hattie's swim. A nice fish of 11-08 which I believe might have been the same pike Dave had out at the end of our last session due to a recognisable growth beneath it's L.H gill plate.I decided that there might be more big pike in this area so slowed the hopping down to a virtual stand still. This would prove to be a wise move.
By now the tide was slacking off and the second take, coming an hour or so later,produced this pristine,boldly marked, and really hard fighting 17-08.
I quickly 'tubed' this fish and set up the camera to perform the self take shots shown above.Quite pleased with the results though, as you can see in the un-cropped picture, the dog was less than Impressed.
Having nearly fallen in the river, and plastered myself in mud returning the fish, I settled down only to have another take on my last roach bait within the hour.The fish made a complete hash of my landing net so I had to cut all the hooks and trace free with side cutters (essential piking kit) and trashed the net in the process.I quickly weighed the fish at around 11-08 but didn't bother with the camera as she'd been out of the water long enough. I needn't have worried as she powered off with no damage done.
I 'm pretty sure this double was the same fish that I'd caught earlier, back for another go which goes some way to show that they are not bothered by being captured.Dave had a similar experience a couple of years ago on a last day on the Adur with a big double.It came back twice for a half mackerel!
With all my roach gone(six of seven  had produced fish) I finished the session with all the rods on sardines but nothing further showed and I called it a day, and a season, as the light started to fail at around 6-00p.m.
Conditions have been perfect the past few days which probably accounts for the quality of the fishing on the river, and this has been the best 'last week' i've personally ever experienced.Parham has been consistent, but of course this doesn't mean that if we return next October the fishing will be the same. This stretch has been a 'heart breaker' on as many , if not more occasions, than it has produced, and serves to illustrate just how transient the pike are on this river.
So, another season ends and It hasn't been an easy one.The total number of pike that I've caught  is lower than previous years, but there have been some really good fish among them, so I not unhappy with my results.A late start didn't help matters, but my mind was on other salt water predators at the time.A long series of blanks during the harsh weather ,at the end of last year, could have possibly been avoided with roach baits, but I can't be sure.
The tidal stretch of the Adur turned out to be a bit of a disappointment, but this was probably due fishing it during poor weather.As usual the Arun was challenging, but when we found the pike,in favourable conditions, we scored. 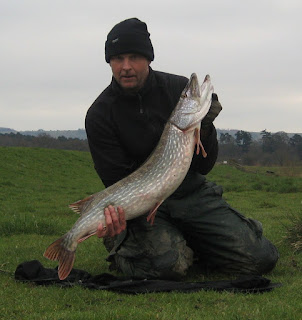 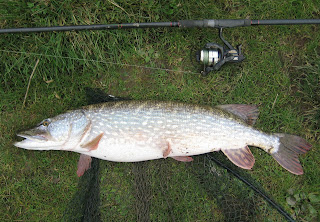