Only a week ago I was still targeting the summer species wearing a t-shirt but, with the daylight hours noticably decreasing, and the temperature dropping, it's time again to swap the delicate avon float for a 'mooring buoy',dig out the thermal suit, and fish for pike. Not that i'm completely discounting another crack at the mullet or bass.With the recent windy weather the surf's  up out back and P.P's been  there catching four pound bass (laterly a six pounder), and there's a possibility that , given the right conditions, I may get another chance of an Arun mullet..who knows.
Dave and me reached the first swim at the bottom of the Washingham stretch at dawn, with barely enough light to see the floats. The river ,despite the recent rain, was in excellent condition, clear enough to fish with lures had we brought any along with us,which we hadn't, and the tide was just beginning to drop.
The corner swim threw up a blank but after a move Dave landed the first pike on smelt, followed by a second on a pollan,hooked just as he was winding in to change his bait, and a third before we'd reached the sluice, again on paternostered pollan.Biggest of the three was a high single-I gave him 8lb.
By the afternoon we'd crossed the sluice ,my float finally decided to make a move, and out came the thinnest pike I've ever seen and a tiddler that would probably barely make 3lb-still....it saved me blanking.All the pike were still lively in the relatively warm water, and their markings remained bold due to a summer of clear water conditions. With the arrival of rain and generally murky water conditions, the pike tend to lose their colour ,and turn rather dull, some displaying a unique electric blue tinge along their flanks.
We covered a few more swims before knocking off at 4-30 . Nice way to start the river pike season in earnest.
In the evening we met up for a beer with Michael Kernan in Hampshire, whose success on the river with lures for pike is well documented in his book on the river.Michael's confidence in using lures throughout the winter season will give us plenty to think about over the next few months. Let's hope the pike co-operate. 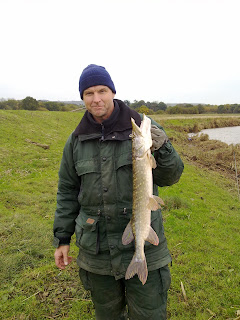