Chew valley lake near Bristol has developed a fantastic reputation for excellent pike fishing in recent years and is capable of producing some real monsters.Like all 'BIG' waters however, it is not easy fishing,and the visiting angler is just as likely to blank, as have a red letter day.
Dave had managed to secure two days fishing for us-the first   from the bank, and the following day having the use of one of the reservoir's hire boats.
Having left home at 2-30am ,we arrived at the lake just as dawn was breaking to find several keen pikers already on the bank near to Woodford lodge, however there was plenty of room, and it only took a short walk to find a quiet spot.
The weather was extremely kind- warm sunny and with little breeze- an ideal day to have been out in a boat.I had a dropped run on legered mackerel early on but Dave caught our only fish of the day with a fish in the 6-7lb class. We did see some action in some distant bank swims and a brief feeding spell saw a handful of fish fall to boats moored in front of us , but i suspect that generally it was a quiet day for all.
Naturally we fished right until last knockings, which is the way Dave and I do business, and subsequently retired to our B&B/Pub in neighbouring Blagdon consuming a fine meal of home made 'babies' eads' washed down with some local ale.Totally knackered by the early start and the hectic days fishing,  we were probably well into the land of 'nod' by half ten.Rather surprisingly, my 'terrible' snoring that tortures Jan's sleeping regime ,didn't bother Dave at all.
After a full breakfast, another fine meal, we were out in our boat by about ten , consciously avoiding the 'rush hour' at the  pontoons.Unfortunately, the weather had deteriorated with strong winds and the occasional shower making life afloat rather tiring.
I had some fun messing around with a jerk bait rod that Jon Cook had kindly donated to my cause , and a small selection of 'huge' lures purchased specifically for the occasion from 'Sovereign Superbaits' but had no luck.Eventually we parked the boat close to a trout pen and I missed a run on a suspended mackerel, but succeeded a few casts later with my first pike of the year-a small jack .Staying in the general vicinity my sardine was soon snaffled by this upper single but that was the last action of the trip.
Beaten up by the weather we called it quits just before dark and despite the general lack of action, we hadn't blanked, and had still enjoyed the experience.Reports from other boats suggested that ,once again most had had a quiet time but, someone had struck lucky with a fish of 28lb which could just as easily fallen to our boat.Chew seems to have suffered the loss of quite a few of its big pike, but i'm sure one day, it will return to past form.
Dave and I have yet to get  lucky on these big waters but it doesn't stop us having a trip once a year by way of a change from our usual tidal river piking. The bird life and scenery is invariably stunning(Dave had a kingfisher perch himself on one of his rods)and we always have a good time regardless of what we catch.We both agreed to return next year if we can get tickets. 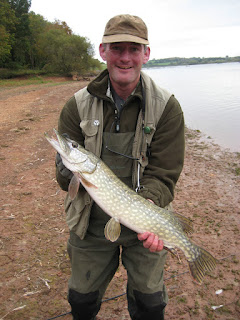