Enough of this messing around with boats and motors, it was time to catch some fish.
The weather has been a tad chilly following the recent rain and it appears that there are less mullet showing in the river.I suppose the season is getting on, but i've had them this late in the year before.
I should have been working this morning but P.P really wanted to get out for a couple of hours, and I couldn't really let him go on his own,could I.We parked up at the road bridge and decided to walk up the west bank starting just upstream of the prison bend.I've not bank fished this stretch for many years, and the revisit reminded me of past sessions.It's a peaceful area to fish, out of earshot of the A259 and usually sheltered from prevailing winds by some huge trees.It was low tide  approaching slack and we saw very few fish on the way up-just the odd straggler. I'm convinced if they been around in numbers , we'd have seen more.
I'd been fishing for about half an hour, at the lower end of the Ford straight, when I spied a swirl 50yds or so downstream, and this was enough to get me moving.In short there was another whelm , and then the bite came within minutes providing me with this fish at 3-08.
The wind began funneling down the Ford prison straight from the north making things a bit unpleasant so we decided to relocate downstream beyond the prison bend.I walked a 100yds further than Andy and selected a calm area where I thought i might have seen some movement.A sail away bite in three feet of water was missed and after seeing a huge whelm in the swim, which was probably caused by more than one mullet,I bumped off a fish.Bugger!After this things went quiet and no more action was forthcoming.Andy had joined me and we decided to move on but, just as I was climbing back up the flood defence, there was major disturbance in the swim.There were definitely fish still present and, as I'd invested a lot of ground bait in the swim I decided to continue. This proved to be a good decision as I soon had a bite which produced my second of the session at 2-08, and that was enough for me.
P.P, being of stubborn nature, returned to the truck with me to collect his shoes, but elected to stay on and try to get his 'last' mullet of the season from the east bank.Three hours later he phoned me, delighted, to say that his determination had paid off,and he'd just done it with a fish taken from a swim close to the road bridge.Top man. He'd also spotted a shoal of 30 or so tightly grouped mullet, possibly forming up ready to leave the river-who knows.I think a session by the black shed low down in the harbour might be a good bet, but it'll have to wait until small tides.
With seven fish to go to reach my 50 target-it's looking like I might, just might stand a slim chance. 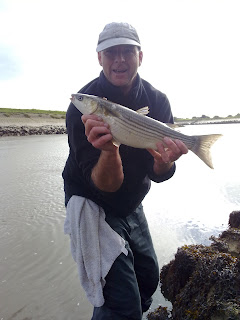