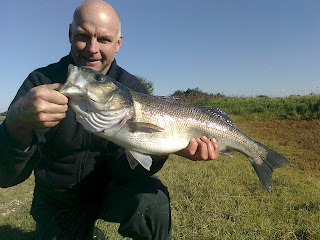 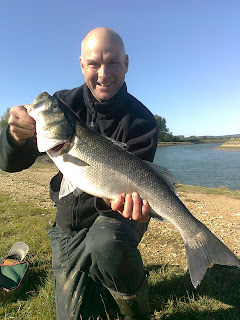 This is a story of extreme good fortune(luck) and opportunism.I was making my way home after finishing some long overdue work when I received a muffled mobile call from a rather excited P.P saying that he was up the river plugging,and that he'd come across an angler who'd had a couple of really nice bass.
I did have one last job planned but despite the cold northerly,the sun was shining in a clear blue sky, and  the temptation to quickly nip home and grab my lure kit was too much, I succumbed,let's face it- i hadn't wet a line for at least 18 hours!
Thirty minutes later,I was walking up the west bank spotting numerous good sized mullet in the clear, high water. I did think to myself that perhaps I should have brought along a float rod and some bread, but the fish were so easily spooked by the slightest of movement and would probably be best tackled at low water.My choice of target would turn out to be a wise(lucky) move.
Half way along the first bend I came across 'Barry from Barnham' who had packed up and was making his way home.This was indeed Andy's angler, and in his bag were three fine bass, captured on shad tactics, including what looked like a 'six'.We nattered for a while and Barry turned out to be a really amiable chap , was keen on both the river's mullet and bass, and had quite coincidentally met P.P before on a trip to Dorset.It was great to meet a like minded angler on the river and inspiring to see what he'd caught. There were obviously some decent bass about and the water conditions were near perfect.
Resolving to meet up again sometime on the river, we headed off in different directions and I began casting my own mustard shad ,starting at the lower end of the prison bend. By this time Andy had wandered towards Ford. We made contact by mobile and I decided to fish my way up to him.
.Reaching half way up the prison straight with the tide ebbing strongly, nothing had happened and I'd met up with my mate who'd fared similarly. We both marvelled over Barry's bass and discussed our options, planning to have another crack tomorrow catching the tide a little earlier.Andy then decided to carry on upstream whilst I opted to head for home with the intention of doing a little more at the prison bend before calling it.
I had a couple of casts by the top sluice and then, moving on, half way around the bend, a huge swirl- far too violent to be a mullet , ten yards from the bank, caught my eye and I immediately sent the shad out to do it's work. It was taken Instantly and a sizable fish was on for just a few seconds before letting go-'bugger' I thought, I'd missed my chance.
Seconds later and following another cast there was again,a huge swirl (hitting fry perhaps) fifteen yards down. This fish, if it was the same one, was moving very fast.The third cast went mid river.I took a couple of turns and then BANG-a tremendous thump was fed down to the rod handle through the braid and a fish was on.The little baitcaster curved over and the drag slipped on the baby multiplier conceding line as the fish ran downstream and out into deeper water .
Rather nervously I scrambled down the slippery flood defence to get to the mud bank ,all the time trying to keep a bend in the rod and worrying that I'd lose this one too.It did feel like a very good fish indeed.Once i'd gained my footing the battle was virtually won and although feeling heavy, I was able to glide the fish in and, not having time to assemble the fold up net, I just beached her on the mud.....and started to shake.
I'd finally caught the bass I was after.
Fumbling around and covering everything in mud, I phoned P.P and asked him to come and take the pic whilst I held the fish in the net.By now i'd moved off the mud and was standing on the concrete steps at the lower end- a convenient perch. When Andy arrived, rather out of breath after running a not inconsiderable distance, he was as excited as myself. We quickly lifted the fish out to get the pics(skillfully done) and carry out the weighing,as I was really nervous about holding on to the fish for too long.
I was still shaking, according to Andy,after I'd returned her to the river, having experienced that wonderful feeling of relief( I needn't really have worried) as the bass strongly swam off to 'fight another day'...as they say.
Andy- when you read this this. Thanks a million mate. It's all down to you. If you hadn't have phoned me none of this would be being written.
She went 7-13,a modest size to some, but brilliant by my standards.The look on my face says it all.Whether or not the two takes were from the same fish I'll never really know for sure. But, my gut feeling tells me that the first fish, of which I did catch a brief glimpse, was smaller.At least, that's what I'd like to think.
A large headed, and truly handsome fish, beating my previous p.b by three pounds and in P.P's opinion- 'a fine lure caught specimen'. As I write this a few hours later.....I'm still shaking.....................................................................................only kidding!