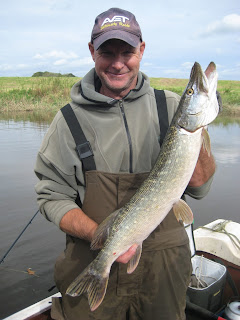 Traditionally, October sees the start of my annual pike fishing campaign although I've found , In recent years , that the river rarely fishes well for the species for the first couple of months of the season. Various theories have been proposed as to why this is the case but in all honesty, I haven't got a clue as to why- they're simply not up for it or I've failed to locate them. It would seem that this season is little different from any other and , after catching a few roach to use as bait, Dave and me headed to a formerly productive
section of river and returned just the one small pike (above) 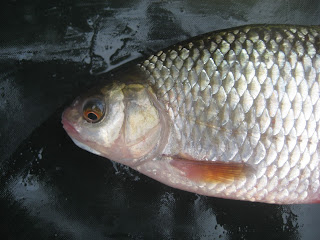 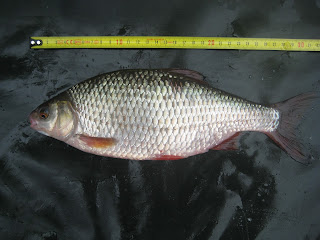 As the piking had been a bit slow (including a blank session later in the month), I turned my attention back to the roach which have really captured my imagination this year. Half a dozen short outings were carried out mostly fishing the ebbing tide with bread and feeder tactics although sweet corn combined with 'Layer's mash' in the feeder also worked well. Along with a few chub to 3lb, I had several good roach to 1lb 6oz and pretty much got a 'pounder' every time I tried, although curiously, I rarely had more than one 'decent' fish from each swim.
Most were in pristine 'scale and fin perfect' condition and a pure joy to catch despite their relatively diminutive size compared to other species that I target but, in my eyes, a one pound roach is a 'BIG' fish. 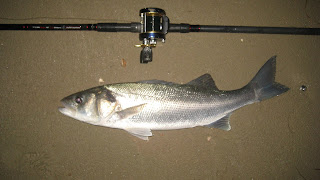 I always try to get in at least a couple of surf bass trips each autumn when the wind 'kicks up' and joined friend Simon and Jim one evening for a session in the suds on a local beach. No monsters to report but I did get a couple of  fish in the 3-4lb bracket as did my two companions.
Usually I can only manage to stand out in the waves for a couple of hours before becoming quite uncomfortable but having recently undertaken a semi serious training campaign involving a push bike in an attempt to improve a knee injury, I'm happy to report that an additional benefit of all this hard work is that I can fish in the surf for longer without suffering.﻿ 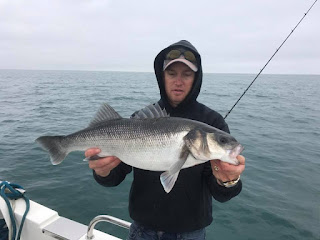 Martin Invited me out on a wrecking trip towards the end of the month and as usual, found some very decent fish from a variety of long distance locations. I mostly concentrated my efforts on  Pollack to well into double figures whilst my host showed me how to catch nice bass ( I did actually get a couple myself)and kindly let me learn how to take pictures of them on his phone!
My own sea boat saw a couple of trips out including a failed attempt with Alan to catch the elusive cod ( hardly anyone has seen one this year) which resulted in a good session catching a dozen plaice to a couple of pounds.
I've rather neglected the 'congering' in the past couple of years so it was high time to have a go at them on my favourite inshore wreck and who better to do it with than marina neighbour Brian. We selected a suitable evening tide and had half a dozen eels in the darkness arriving back at port before midnight.
None of them were monsters but they provided superb sport nonetheless and I made a note to make a concerted effort to target them more often in the summer evenings next season.
On the whole it was a pretty 'average' October results wise but things were set to change in the following calendar month.
Posted by Unknown at 07:22