A couple of pike outings in the first week of the month produced some upper single figure fish( at least I didn't blank) but on the 8th, in less than ideal conditions involving bright sunlight and a chilling North West wind, the pike seemed far more willing to feed.
The day started a bit slow with a single figure fish from a new swim- a recently discovered, and slightly deeper area which shows promise and will definitely be visited again in the future.
A different location however,produced a bit more action- at first a brace of singles took the baits shortly followed by a plump fish of 21lb on the nose. Hopefully, I'll see a couple more like this during the season. 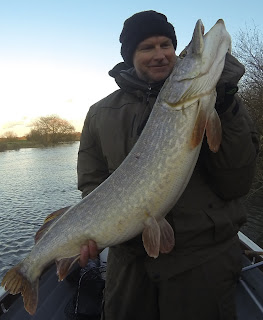 Marina neighbour Brian joined on the 19th for a trip out to sea-my first of the month and indeed for quite a while. Our target was bass , which still seem to be about on our local marks, and the first job was to secure some pouting live baits. My first choice mark was too coloured to be of any use so, with the tide still running we headed out to the first bass mark, which was clear, and ran through with some lures.
It worked well with five reasonable bass in the 3-4lb bracket falling for our tactics until the tide waned, and I decided to try to stock up the bait tank again.
A selection of big pouting were caught and we returned again to the same bass mark getting takes almost as soon as the tide started to run properly.
The only issue was that the baits were simply too big and we to sue experienced several aborted takes, along with a few fish which simply hung on the baits in their mouths until reaching the surface whereupon they were unceremoniously spat out. We did however, manage to successfully hook a few to about 6lb before the mark became a little overcrowded and we decided to move on.
Afetr failing to find any fish at all on a reasonably reliable mark we ended up in an area normally reserved for big wrasse hunting.
The final couple of live baits were snaffled by bass of around 4lb before we reverted to the lures and managed a couple of nice wrasse-the pictured one is 3lb 12oz.
Surface temperature is now at just under 10 degrees celcius so it'll be interesting to see what happens on the next trip. 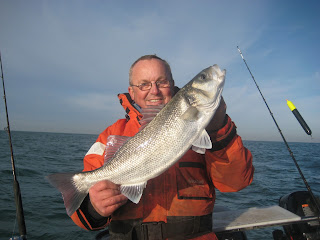 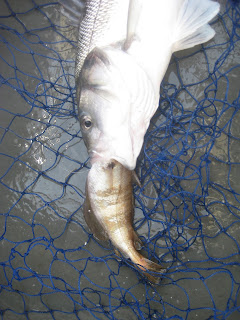 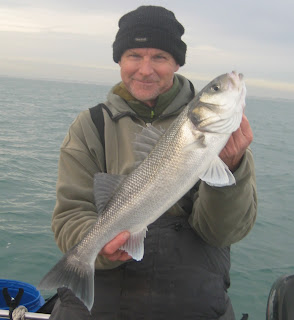 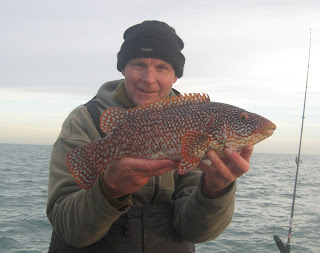 I finished the month, and the year, with an incredible session on the bass taking just over 70 fish on cast and vertical fished soft plastics simply by 'following the birds'. Interestingly, the shoals, which were predominantly made up of smallish fish to about 3lb, were scattered far and wide and not necessarily over any particular features such as reefs.
Also, the shoals appeared between a mile and ten miles out-I didn't feel the need to go any further.The quantity of fish also gave me a chance to try out some of my mate Brian's new home brewed lures which, although primarily for wrecking, proved to be just as effective for our spikey friends. A fun way to end the year. 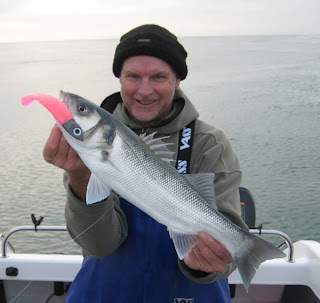