With my own boat out of the water for anti fouling and engine service,on the 2nd I joined my good mate Alex on his Orkney Day Angler 'Samax' for a spot of plaice fishing on one of our western banks.
There were plenty of plaice about but very few of 'keeper' size but it was a very pleasant way to spend an afternoon and hopefully, as the autumn progresses, the size of the fish will improve.
Dave's been catching a few very nice carp from one of our local rivers which he's managed to secure a permit for me to fish, and one afternoon I decided to visit him during a foray. I'm glad I did because whilst I was there he landed a really nice common of 14lb from a stretch so narrow, that in places you could leap across to the opposite bank.
Rain had delayed me working on the boat so , on the 4th, I decided to have an afternoon up the river and continue my search for good roach.
The usual bread feeder tactics were employed in my 'banker' swim and early on in the session a surprise chub of 2 1/2 lb turned up- something we don't often see .
Plenty of bites from 'tiddler's were forth coming but a 14oz roach, followed in early evening by this one at 1lb 7oz finished off an enjoyable session.
I think these bigger roach are solitary creatures as I've yet to pick up more than one of a decent size in a session but at least this swim seems to produce consistently with a 'pounder' on nearly every visit. 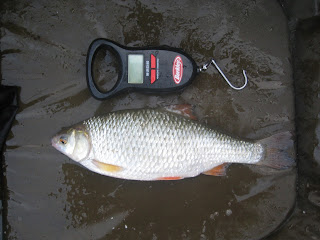 Pristine roach
Dave and me ventured out again on the 9th heading downstream to an area not previously tried but, again,selecting a slightly slower flowing swim sheltered from the main current and its associated debris issues. Dave tried mini boilies , which proved to be completely unsuccessful, whilst my bread and corn managed to produce.
We didn't quite hit the pound target but a brace of 15oz fish plus several other good sized roach made for excellent sport. We even managed to catch on the flood tide until its strength became too much to handle. 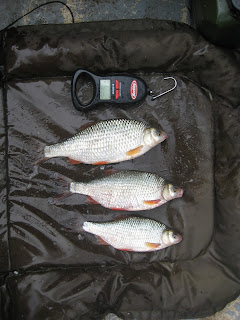 It took me quite a while to get the Warrior sorted although work and poor weather would have stopped me going out anyway but, in the meantime with my boat still out of the water, on the 16th, I joined Brian on his Orkney for a trip out to a deep water mark in search of an early cod.
The target specie didn't materialise but we still had an enjoyable day out catching rays, tope, smoothounds,and  the Inevitable L.S.Ds on big cuttle and squid baits, which were being constantly hammered by palm sized bream.
Highlight of the day however, was this superb bull huss for Brian of 12lb 12oz- the first local one I've ever seen.Well done mate 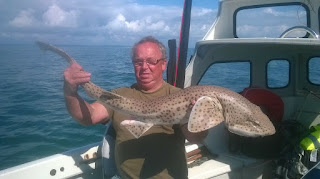 Back on the roach again on the 18th and, true to form , another pounder at 1-06 turned up along with one just under the pound along with a handful of lesser fish from another new spot downstream(another slower flowing run) from the mooring. Are these decent roach spread out all along the river? I ask myself.
On the 19th With the boat now finished and back on her mooring,Dave and me ventured out to sea specifically to target something  to take home to eat...in this case -plaice.
I've been meaning to try plaice fishing from my own boat for some time and, although today's big 6m tide was not ideal, we were blessed with some rather lucky weather conditions. We caught right from the off on the last of the flood but when the ebb set in, at first, it felt like we were drifting too quickly until the wind against the tide picked up to slow our drift speed down enough for the plaice to have enough time to hit our baits.
We ended up with twenty plus fish to two pounds, along with a couple of tub gurnard for variety, with several taken for the pot in an extremely enjoyable afternoon's fishing. 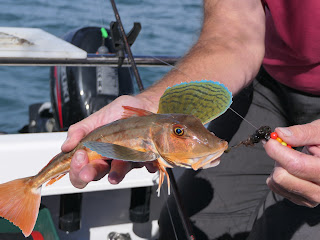 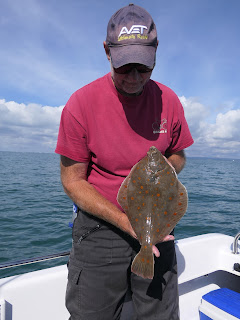 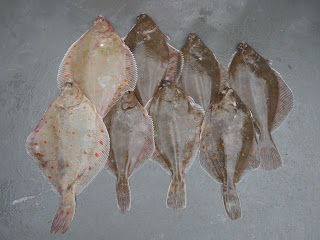 The following day I had a short roach session on the river, which proved to be slightly less productive than normal producing only a couple of half pounders amongst the tiddlers continuously nibbling away the bread flake bait .
On the 22nd I headed out to sea again with just a lure rod in search of a bass, selecting an offshore bank to have a bash at. I did succeed in catching the target specie-ten of them in fact, which was pleasing but they were a little on the small side however, it was good sport.
Martin meanwhile was persisting on the local marks with a live bait and this did eventually pay off with a tidy sized fish taken on his final drift of the day. There aren't that many about at the moment which is puzzling.
﻿
﻿
Posted by Unknown at 09:19