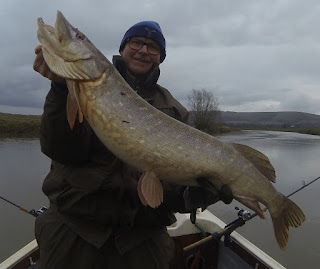 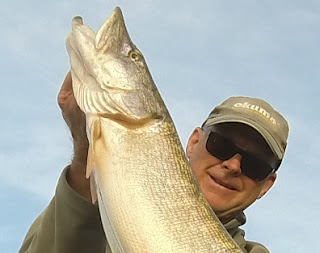 An 'eleven' that I'd seen before. 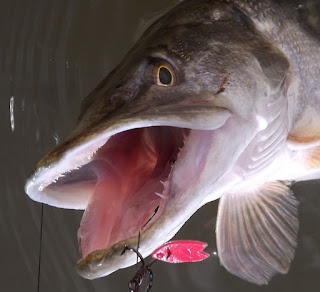 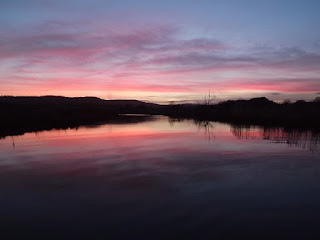 The sun sets on another river season.
Following our return from the Broads I managed to squeeze in three sessions on the river before the closed season took effect.
A short evening trip produced a jack , and a fourteen pounder from a reedy swim and, the following day, in bright , sunny conditions an upstream trip gave me another jack, and the recapture of an 'eleven' from an area that has otherwise been relatively disappointing, results wise, this season.
The final day resulted in a blank but I was fortunate enough to spot a peregrine falcon 'doing It's thing', and was captivated watching it's antics for quite some time.
These fantastic birds are becoming a more regular sight in our neck of the woods and I've been informed, by a far more learned bird enthusiast than myself, that nowadays they spend the majority of the year in residence, defending their territory.
The pike fishing season is extended slightly on 'my' still water venue, closing when the water temperature increases to a certain level and , a few days after the river fishing ended I visited the water for the last time.................and blanked.
Although it hasn't really produced the goods I will be returning again next year. I haven't used it very much because the river hasn't really flooded this past winter but I'm sure If I didn't renew my membership next year, the river will be out of sorts, and I won't be able to go pike fishing.
Although not quite as productive as last year, both Dave and me have caught more pike  in our boat this time around than we would normally catch when bank fishing and, despite the extra expense, we will continue to keep it moored on the river with perhaps a few more excursions towing to alternative venues.
Posted by Unknown at 03:49