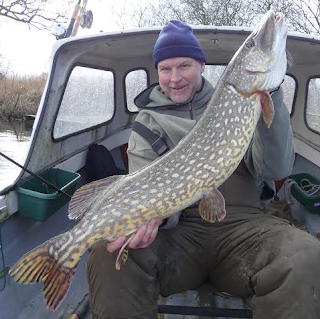 
The Norfolk Broads, also known as 'Broadland' Is synonymous with pike fishing, and famous, or Infamous, depending upon one's point of view, pike anglers. Historic names such as Jim Vincent, Dennis Pye, and Bill Giles among many others,along with a plethora of notable pike captures have frequently been seen In angling publications for decades and, at some time during any true pike enthusiast's career, a trip  to fish the extensive system of waterways Is surely essential.
However, like any venue for the visiting angler ,It's not always an easy place to 'crack' and, for me personally, It has, at times, been frustrating in the extreme. 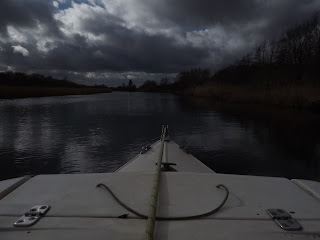 Almost ten years ago, Dave and me , along with our good mate Paul Fosterjohn visited Horning on the River Bure for the first time. That Inaugural trip produced a 'twenty' for Dave from the back garden of our 'digs' of all places, along with a handful of other lesser pike but, subsequent visits have proven far less productive, despite using a variety 'floaty' things to try and Improve our chances.
This year's trip was to be our fourth, and our first venture using our trusty Orkney Longliner river craft 'Finatic' anywhere other than her home venue, which we towed up on the back of Dave's 'four by'.
We've always stayed in the same holiday let-'Wake Robin' a small riverside apartment, complete with authentic 70s décor, fixtures and fittings but, with It's own garden mooring and fishing spot, trailer parking and a huge garage where we can spread out our kit. Access to the river for our boat, Is from a village slipway just a few hundred yards away and a suitable hostelry well within staggering distance, which serves excellent food and a wide range of fine ales completes the picture of our perfect winter piking destination. 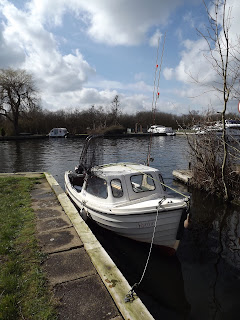 Motor trolling is outlawed on the Broads system, as we've found out, to our slight embarrassment on previous visits  but, despite having a cuddy, our Orkney Is just small and light enough to row effectively, In low wind conditions, and so our main attack plan Involved float trolling live baits for the pike.

But, before we could attempt this we had to catch our baits and, on the first afternoon, after we'd launched our boat and secured It's mooring spot, the general coarse rods and maggots were put to use in the 'garden' swim.
Nothing much at all happened until the light faded and then the river seemed to come alive with topping roach but, It was the perch that were most Impressive. Using a single maggot on a size 20 I managed to up my personal best perch with this one at 2lb 15oz - a most splendid fish 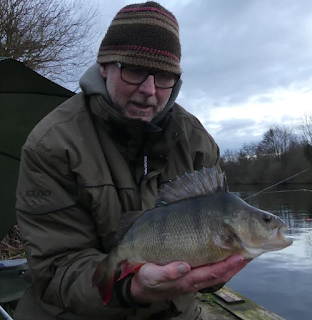 ...and there were more to come on subsequent evenings with many to just under 2lb falling to worm baits, along with some superb bait sized fish. 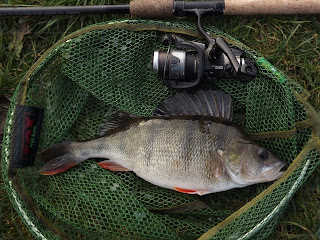 1lb 10oz perch......NOT a bait fish It must be added.
On the final evening Dave 'slaughtered' a shoal of them on worm section with maggots as feed, using his ancient 'cane and pin' outfit, whilst I attempted, and failed, to catch some big roach on quiver tipped flake that we'd been told were present, and will require further Investigation on future visits. One other little 'treasure' that did turn up snaffling our worm baits were some ruffe. Also known as pope , neither of us had seen examples of these since our teenage years. 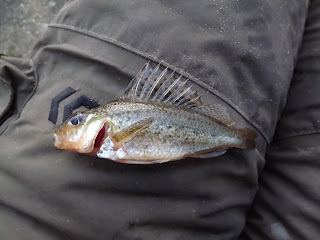 A feisty ruffe.
As for the pike fishing-well, concentrating for the most part on the river sections rather than Broads themselves, the trolling certainly worked It's magic when we were able to do it .
As well as a handful of lesser pike, the big girl at the head of this entry made my first day, and Is indeed my sole twenty pounder of the season. She took a big roach bait some thirty yards behind the boat ,and must surely be the most vividly marked 'twenty' I've ever caught, and a pleasant change to the pale creatures we're accustomed to catching on our local waters.
At times the wind made trolling almost Impossible and we elected to fish static baits which, although  producing a couple of aborted runs , was less successful that the more mobile approach.
Whilst bait fishing In the garden,  we both also had pike rigs out but, unlike on former occasions, these failed to produce much more than a couple of takes from jacks which surprised us somewhat as our ground baiting was attracting plenty of prey fish Into the area.
Towing and working our river boat proved extremely easy , due in no small part to It's light weight, and I'm sure that with what we've learned on this trip, many future forays to various venues will be undertaken both for pike, and other species. 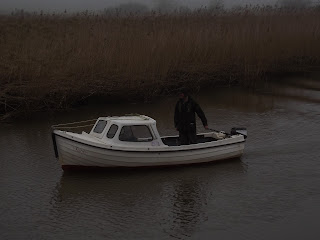