On the 4th I quickly nipped out of the harbour for a couple of hours that evening and managed to catch a nice bass of close to seven pounds on a lure but, little else happened and hardly any signs of fish were seen on the sounder. 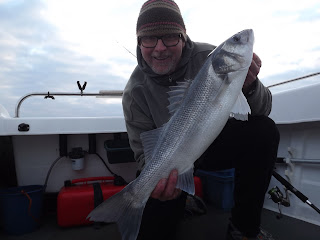 The plan for the 6th was to secure a few live baits and try for a decent bass but, best laid plans and all that..............
The  baits(pouting) were actually quite easy to find and once I'd had enough in the tank, decided to head over to the reef mark and set out my float rig. First drift  through, on the last knockings of the ebbing tide, produced a take, and a good bass hooked but...............subsequently lost when it slipped off the circle hook. That was to be the only action to the live bait rig all day.
Meanwhile, the soft plastic lures, both fished vertically, and cast away from the boat, did their job quite well although  it must be added that the bass weren't exactly monsters. Whatever, I was having fun and soon lost count of those caught.
Black bream have also been showing up regularly on baits and when I hooked one on a lure, It was a cue to drop the pick, and send down the 'messy stuff'.
The bream came thick and fast which was nice to see but ,again rarely of any size-maybe just under two pounds maximum. Again I enjoyed the fishing and it was good to see these old friends return again for another year, one in which I might spend a bit more time targeting them with a view to breaking that elusive four pound barrier.
I finished the day, a long one at nearly twelve hours at sea, back on the lures with a final flurry of bass from the same reef area.
So bass of any size proved elusive possibly due to an extremely small tide. One commercial rod and line angler was working a nearby area and having struck up a conversation with him, I found out that he was also struggling to find the better fish. As per usual, we'll never really know why. 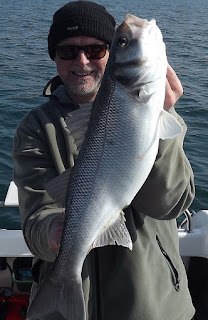 and a plump bass