It's already March 3rd as I write this and another river pike season is drawing to a close. I was away fishing in Panama (more of which later) during the back half of February and Dave and me will be towing our river boat to the Norfolk Broads in a couple of days for a week's piking so it remains to be seen whether or not we'll get a chance to fish the river again before the close of proceedings.
At the moment, due to recent heavy rain, It's running very high and coloured, so much so in fact that it may cause us problems tomorrow when we attempt to recover the boat on its trailer for our trip. The water levels at high tide will prevent us from navigating under some of the bridges and it may be necessary to wait for the ebb before levels drop enough to clear the cuddy roof, and allow us to reach the slipway some ten miles downstream.
We were hoping to be able to use a makeshift slip some five miles upstream but it doesn't look like that's going to happen.
I did have a few  pike trips in the first half of February before travelling abroad, with not much to show for my efforts.
My birthday on the 9th produced nothing to my baits but Dave secured a really nice 19 pounder on a small live roach that he'd caught using feeder tactics. A short session two days later produced yet another blank but was followed, again two days later ,by quite an active session with two dropped fish and this one at 12lb-8oz all on live baits. 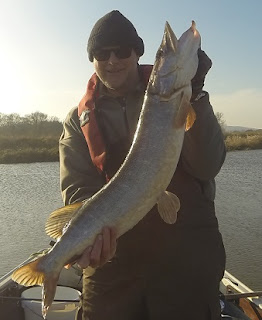 I returned to the same area the following week in very mild weather conditions but could only manage a , rarely seen this season , Jack pike again to a small roach bait caught as the tide was flooding.
Dave meanwhile, has been putting in considerable effort on a neighbouring river trying to extract some of its legendary pike but I'll let him tell his own story here; https://ahookinmytrousers.wordpress.com/blog/
Posted by Unknown at 10:43