Inspired by yesterday's run out with Martin I decided  to go 'solo' today and explore some relatively new ground in the hope of a bass or two. Setting off at midday with just a spinning outfit on board (no bait) my intention was to fish as much of the ebb tide as was possible before having to return to port to catch the river bar.
This gave me about three hours maximum to fish so I set out to concentrate solely on one mark, and thoroughly scan it repeatedly with my drifts. If I managed to catch, then all well and good but if not, then at least I'd have learned something about the geography of the place.
The first few drifts in still 'slackish' water proved fruitless and nothing at all was showing up on the fish finder but, I was committed and the easterly wind was less than forecasted so not hampering my drift speeds. In short I was fishing efficiently and was confident that if bass were present they would take.
As the speed of the tide gathered the bass 'switched on' and it was a 'hit' on almost every drift-all fish of a reasonable size and all taking vertically fished soft plastics. It's probably best to just list the fish in order of capture for the sake of simplicity and in addition, I dropped three more fish too.
The '4's are estimated so fall in the 4-5lb bracket.
here's the list; 5-00, 8-12, 5-12, 7-08, 4-00, 5-04, 7-12, 6-06, 4-00
Sadly, at the prescribed time I had to leave the shoal and head for home and it was indeed a difficult thing to do but it had been a most enjoyable session and time will tell whether the mark can produce consistently. 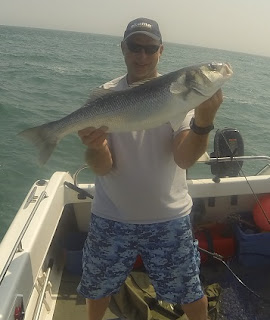 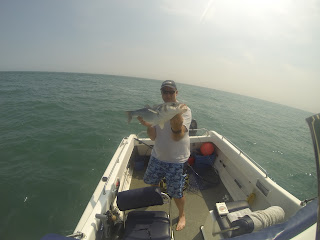 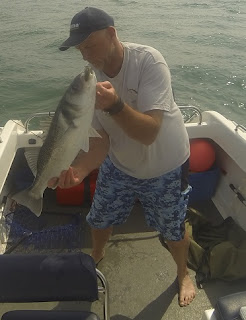 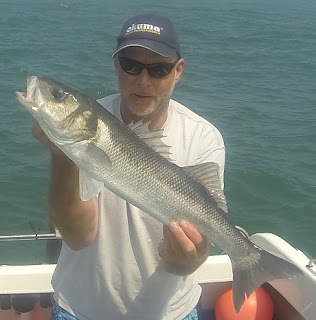