A phone call to Simon shortly before lunchtime was enough to tempt him out for an afternoon's bream fishing even though he'd spent most of the previous night fishing the 'shingle'. You have to admire the man's dedication.
'Brian's' was the mark of choice and, as a little experiment, I decided to bring along a bucket of boiled rice to try as ground bait.
The method of dispensing the rice is fiendishly clever and was shown to me by one of our well known charter skippers. A suitably heavy lead with some heavy mono attached is trapped in the bottom of a stout plastic bag using a cable tie.
Main line of a 30lb outfit is connected to the mono by a swivel and the bag filled with a lump of rice about the size of a grapefruit. This is quickly lowered off the stern, the contents  being held in place on the way down  by water pressure. Once the sea bed is felt the rod is raised sharply inverting the bag and spilling the contents just where you want them.
Adjusting the lead size effects where the bait will land so keeping the 'attraction' in the take zone
Whether it improved the catch rate ,or not, is difficult to say for sure but we certainly amassed a very good bag of bream with 44 fish to just under 3lb  in just 3 hours fishing.
Some of the fish regurgitated the rice at the surface so they'd obviously found it appealing. My learned friend Clive tells me that the rice is a close imitation of cuttlefish eggs which they tend to feed heavily on at this time of year.
Interestingly sport didn't slow down noticeably over the slack water period which is usually the case so perhaps this 'ground bait' lark warrants further investigation.
We had hoped to break the 'half century' but sadly a call from a nearby boat in trouble resulted in us having to quit early and facilitate a tow back to port before the ebb tide had built up too much.
Result. 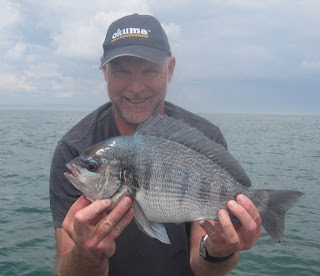