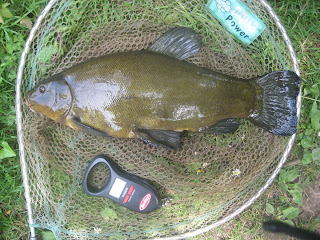 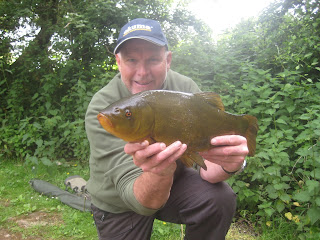 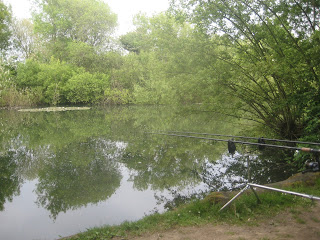 Another brief afternoon/evening session to the local pits in search of tench.
This time I selected an old favourite swim that I haven't visited for a couple of years tucked away in a quiet corner of the lake. The spot features a couple of lily pads at different ranges so the feeders were placed as close as I dared thinking that the intended quarry would be present.
In fact, the tench can be caught from this lake in open water, as I've proved before, but tradition dictates that these leafy spots are classic holding areas.
The only slight problem comes when these hard battlers decide to dive for cover, which they regularly like to do when hooked.
Thinking back to when I was a keen coarse fisher in my teenage years, a tench of five pounds was something of a specimen revered by pleasure and specimen hunters alike and, If I remember correctly, the British rod caught record at the time(mid nineteen seventies) was a tad over nine pounds.
Standard tench tackle at the time was a five pound breaking strain line and, If you were float fishing, which you generally were, then your  'match' rod would be pressed into service for the task, and it would usually prove more than adequate.
Tench have grown somewhat over the years, as have many coarse species, although quite why this is the case I really have no idea ,and tackle and methods have also evolved mostly due to the use of advanced materials.
Float fishing is still a viable method and is probably more aesthetically pleasing but personally, I see nothing wrong with modern approaches, they are certainly very efficient fish catchers, and I adopt them where I see fit and if the mood takes me.
My approach is to fish a 'bolt rig' in-line maggot feeder , which is semi fixed in case it should snag, with a very short 2-3inch hook length, and a size 14 hook. Bait is double red maggot but also added to the hook is an imitation maggot which floats and theoretically gives the hook bait neutral buoyancy.
Main line is a 'whopping' ten pound breaking strain matched to a 1 3/4lb test curve rod (a pike stopper back in the day), balanced kit designed primarily to cast the heavy 2oz feeder but the hard fighting tench still get to display their fighting prowess. Also if they do dive into the lily pads , on this strength of kit, you will generally get them out by being patient and keeping the pressure switched on.
I caught two tench this evening , almost 'peas in a pod' at 5-05 and 5-06 in weight but, annoyingly, I was bitten off by three more fish. This is not the first time its happened to me here either and is extremely frustrating. It cannot be the line or knot failing as I've thoroughly tested both, and even increased the line strength to 10lb fluorocarbon which should be more than adequate so, in truth, its all a bit of a mystery.