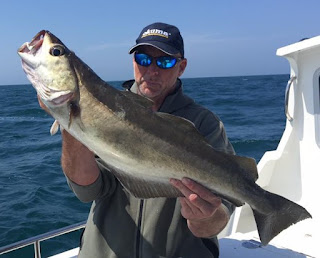 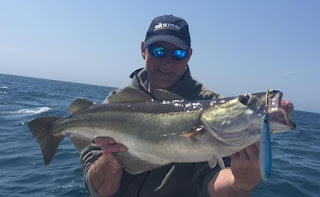 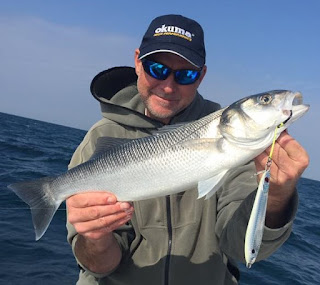 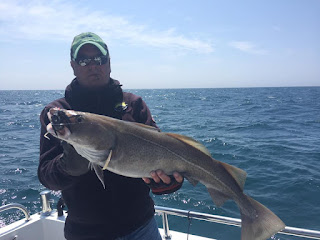 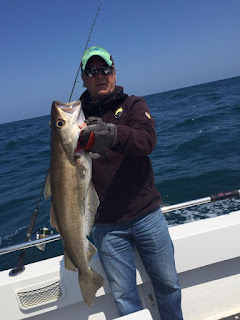 Perhaps because of the distances involved, and the quantity of fuel required, apart from the odd trip, I've still yet to get around to trying wreck fishing on a regular basis from my own boat.
Father and son team, Martin and Brian, on the other hand, are regulars on the  'wreckage' and very successful at it to boot.
Usually, at this time of year cod show up on some of our wrecks at a moderate distance form port. Martin had ventured out a few days prior to this trip but reported that water clarity had been poor due to an algal bloom known as 'May rot'. He said he could see fish on the wrecks on his sounder, but was unable to catch them apart from a few foul hook ups.
In the event he had to move further out to sea to find clear water and today proved to be a similar situation with us having to travel so far, that the fish were speaking with a French accent.
Martin's skill as a skipper shines when wreck fishing and his boat positioning ability is second to none. We drifted many wrecks during the day and picked up fish on practically every one-mostly Pollack it has to be said but, with the odd bass and target specie cod thrown in.
Forty plus miles off and the easterly wind was having quite an effect bumping up the sea and speeding up our drifts and causing our lures to 'string out'.
I opted to fish most of the time with a streamlined metal jig  of about 200g fished direct to the main line and this seemed to work very well indeed. With  fine PE1 braid and a comparatively light 60g spinning rod the fishing was very entertaining indeed and my 'new' Van Staal' reel was more than up for the challenge making it a very versatile tool indeed.
|By the end of the day we'd steadily managed to fill up a couple of big boxes, returned many more fish when possible to do so, and probably travelled well over one hundred miles in the process.
Quite a run out.
Posted by Unknown at 07:22