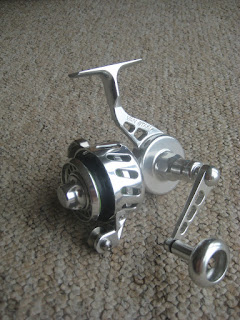 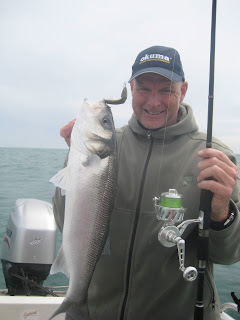 Seems to work O.K
It's sting ray time again and , as I'd heard on the grapevine that one or two might have been caught locally(never trust the grapevine) last night I decided to dust off my beach rods and head to the shingle with Simon. In short, we failed to find the target but did get a schoolie and a dogfish (wow) however, Its early days yet and plans were hatched for future forays both local, and afar.
Let's hope this year I can actually succeed in getting one!
What is turning up on our beaches are undulate rays, and some very impressive specimens at that. Several good double figure fish have been reported,  and it appears that this situation is the conservation success story of the decade.
Undulate rays are a protected specie, I'm told, although I'm unsure as to the exact level of their protection. Whatever the case, there seem to be plenty of them about and its great to see the shore boys and girls, who have to work exceedingly hard for their fish, pick up some good catches.
I didn't return from my beach session until the small hours so, an early start on the boat this morning was just not going to happen.
Marina buddy Brian had just completed some service and repair work on his Orkney and was eager to get it afloat, and out fishing, so I was invited to jump on board with him for a few hours in the afternoon, and fish lures.
A convenient local mark was selected and we headed out at breakneck speed as Brian had just cleaned his bottom!
On arrival, Neil on 'Spirit' was drifting the mark and out of respect, we elected to give him and his customers plenty of space to 'work'.
Interestingly the bass were showing well off the mark, over clean ground, which is sometimes the case at this location, but rarely did we see any dense concentrations of fish on the sounder.
We elected to try a slightly different approach to normal in that we were casting our soft plastics well away from the boat, allowing them to touch bottom , then retrieve at a speedy pace in a standard 'spinning' fashion. If fish showed under the boat then we reverted to our more normal vertical tactics and the ploy seemed to work well, with bass caught on every drift ,and us soon losing count of those captured.
Most were on the small size , with the odd better one as above but, it was highly entertaining and hectic fishing although it has to be said that fishing with |Brian is always entertaining regardless of the catch..
Occasionally, bird activity would help us relocate the shoal which appeared to be quite well spread out and moving, but rarely was it necessary to drift on to the main reef to catch.
You may also notice a serious bit of 'bling' in the picture at the top of this entry. Yes, I've treated myself to a Van Staal bail less spinning reel having become a little fed up with actually managing to wear out lesser reels.
This particular example has some heritage in that it was previously owned by two fanatical lure fishing mates before I managed to secure a deal on it. Well, you don't think I'd buy a new one do you!!!  After all , I've paid less money for good cars!
The reel looks like an antique, feels like a tank , the line lay needs some careful 'fettling' and not having a conventional bail arm takes a little time to get used to but, It's superbly engineered , has a silky smooth drag, and should outlast me.
Van Staals are something of a 'Marmite' reel and certainly not everyone's cup of tea but I like it very much indeed and, as I promised the previous owner that I wouldn't sell it on, it's here to stay, for better or worse.
,
Posted by Unknown at 10:12