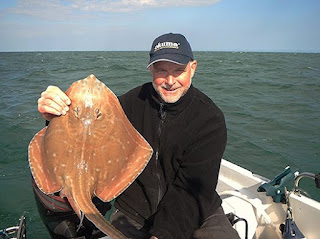 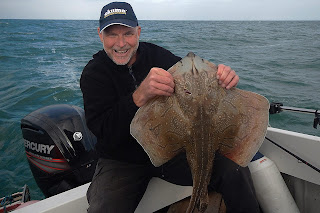 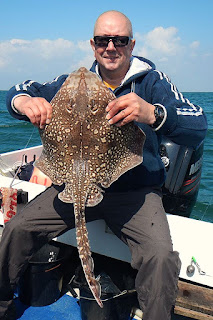 A 'thornie' for the 2016 species list
Clive is a very accomplished all round sea angler with some thirty plus years of  small boat fishing experience. He and his brother Kim run a very tidy  Orkney Day Angler 19, a favourite of mine, and when I was asked to tag along for a tope run , I jumped at the opportunity as a chance to chat at length with Clive about all things 'fishy' is too good to miss.
The Hodges brothers are part of a small group of local boat anglers, both private and commercial, who have assisted me over the past few years. It's been a steep learning curve but, without their guidance , I feel my progress would have been much slower, and I would certainly have not experienced some of the superb fishing our area can offer.
The wind forecast was reasonable so we motored west from the river, stopping briefly to attempt to collect some mackerel baits with unfortunately, little success.
This was not a problem, as we had a good stock of frozen bait on board and , in my experience, tope are less than fussy when it comes to food so, not wishing to waste time, we continued to the deep mark.
From the first drop , it was 'game on' and we managed a dozen or so tope to about 20lb in weight before swinging in the tide. Modest pickings by the mark's usual standard but deteriorating conditions were not helping matters. Clive did, at one point, hook into a better sized tope which gave a good account of itself until successfully escaping before we'd even managed to see it.
By lunch time the winds from the South West had picked up considerably and assisted the now flooding tide to hamper our ability to anchor successfully.
After  slipping the third time, we decided to abandon the mark and head for an easier option-anchoring a shallow bank  #46 with perhaps the chance of a blonde ray.
In the event, a 'blonde' was the only specie of the more common rays to not show up.
I had a small eyed ray-my first of the specie which, on Clive's recommendation, was taken for the pot, an undulate ray into double figures, whilst Clive managed a couple of thornback rays which , along with tope ,will add to his species list.
He has a target of fifty different species for this year and it wouldn't in any way surprise me if he achieves it such is the angling skill of the man.
A most enjoyable day ended with a run home in a rough sea  at displacement speeds (seems all too common of late)which the little Orkney and its skipper handled with ease, and a quick lesson in how to prepare a ray for the table was carried out back at the pontoons.