I can think of so many instances in fishing where my stubborn nature has eventually paid off. I can't call it patience because in reality, I'm not the most patient of anglers, and tend to be a bit of a fidget.
This is possibly  why I'll never succeed as a specimen carp angler, nor ever catch a barbel from the River Arun unless by a stroke of extreme good fortune.
No 'stubbornness' is a different kettle of fish altogether.
Today I went mullet fishing whilst still standing on 'terra firma' as opposed to being afloat-the first time I've done so this year.
My favourite low tide mark seemed to be pretty devoid of mullet activity although one or two could occasionally be seen milling about up and down stream so, although my confidence wasn't very high, I decided to give it a go anyway.
The last of the ebbing tide didn't produce a bite but, with the water level slowly rising and the flow slowing almost to a halt, a few whelms were evident in the general vicinity of my swim indicating the presence of mullet.
I like this state  of the tide because usually, the water colours up sufficiently to prevent the fish from being spooked by my clumsy movements in the gloopy bankside mud, and they can often get very close indeed before detecting me.
I tend to target a couple of small 'promontories' in the river bank which cause slack areas , especially on the first of the flood. The mullet like to skulk in this 'dead' water and can often be tempted to feed, to a degree.
The only down side being, because the bait is moving very little, they appear to be aware that there is no rush to take it. Bites can be extremely delicate fooling one into thinking that tiny fish, such as smelt, are pecking at the bait but often,this is not the case.
Having hooked and landed so many mullet over the years in this exact situation, I know better. However, this doesn't mean to say that the fishing is easy and I can recall multiple occasions when I've failed to connect with these most infuriating of mullet.
Today was no exception- I just could not hit their delicate twitches and even 'sail aways' with the float appearing to glide across the surface, though not submerging, were missed.
It's almost as if they can detect when you are about to strike and a millisecond beforehand,  cunningly spit out the bait-ba****ds.
Once the flood tide flows in earnest , usually they seem to disappear, probably moving off upstream, and if you haven't caught by then, its 'game over' -the chance has been missed, and its time to pack up.
Frequently, without wishing to blow my own trumpet, by this time I'ld hopefully already had a mullet or two on the ebb so if I fail in this 'still water' I don't usually mind. It's always been a rather pleasant, if somewhat challenging way to finish a mullet session on this stretch .
Today, thus far, I had blanked, and wasn't best pleased.
For some reason, when it came to packing up time,  I didn't follow the customary 'de-tackling' process, nor did I throw the remains of my bread mash ground bait into the river, before walking back to the van 'just in case' I came across a few 'stragglers' I suppose.
Well, those 'stragglers' did indeed appear but, as is customary with mullet following the flood at this location, they weren't 'stopping' for a 'look'. They always seem to  have something to do upstream at this state of tide and this behaviour has always mystified me.
As I watched them sail past me I noticed one or two double back to the shallows-perhaps stopping for a snack in merely inches of water , their angular tails cutting the surface rather like a mini shark fin.
By now the tide was at half flood, pushing in strongly and the current was extremely fast. I sent the float down and when it disappeared , on about the fourth or fifth run, I was so keyed up, the strike, which I'm delighted to say 'connected,' lifted the poor mullet completely clear of the water.
Thankfully, the 'shock' didn't seem to harm the fish and, after the usual spirited fight, this modest three pounder graced my net to make me one very 'happy bunny' indeed.
It was with one big smile, and no small amount of satisfaction that I watched him glide back into his regular environment, none the worse for the experience.
Sometimes, persistence does pay off. 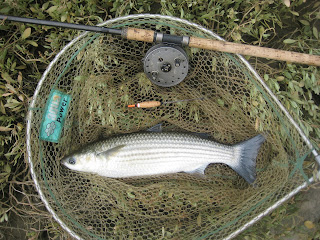