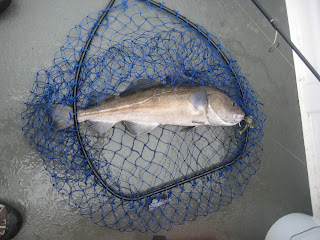 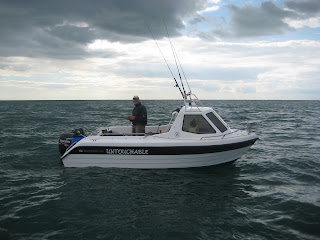 Jupiter's sister craft...Rusty's 'Untouchable'
The day began by testing out a theory.........I like theories. The grand Idea was to attempt to attract mackerel shoals to the boat by using a sack of shark chum. To cut a long story short, it didn't work. Well, at least not well enough to notice any improvement in the mackerel catch. I got about a dozen or so , and put half in the bait tank, but it all took a bit longer than expected.
Arriving at the first mark I met up with marina neighbour 'Rusty' aboard Jupiter's sister craft- an almost identical 175 Export. He'd 'wasted' far less time than me , and caught more mackerel completely blowing my theory out of the window.
I guess you can't fish for what isn't there!
I drifted a 'livey' under a float on one rod and vertical jigged a 140 Fiiish Minnow on the other for just one small bass, and this rather nice cod on the artificial.
My live mackerel were left well alone but Russ did better, picking up a couple of mid sized bass on the same method -one on a scad.
The going was generally pretty slow so I relocated west finding another popular reef mark completely deserted.
This time the live mackerel were hit......no less than three times but I just could not connect. For whatever reason the hook just did not get a hold yet the mackerel either came back dead, or just not there any more-intensely frustrating but that is fishing.
Posted by Unknown at 13:01