Perceived opinion states that mullet, and in particular 'thick lips', are always a 'difficult' fish to catch.
Whilst I agree , they are a tricky adversary at times, with a little understanding of their habits, and lots of practice, they can be caught regularly.......If you can find them.
The biggest problem I had today was that of location.
According to the weather gurus, yesterday, we experienced a month's worth of rain in one hit. The river at the 'small boat' mooring was coloured, but didn't seem to be carrying an excess of water probably due to the surrounding land being bone dry.
It was still carrying a little colour downstream on the 'mullet grounds' and despite having a good look around, I didn't actually see a sign of a mullet all day. Its entirely possible they have been moved downstream by the fresh water. Hopefully, this will be a temporary situation.
The only fish I caught was this one at 4lb 9oz and it came very soon after arriving at the first swim, the lower mud flats, so filled me with confidence.
With the boat anchored in merely inches of water, and the fish giving me quite a hard time when I coaxed it anywhere near the landing net, I decided to hop out on to the bank and beach the fish. It certainly made things easier.
Unfortunately, that was that. A tentative, but definite bite towards the end of the session was the only other action .
The little Orkney is proving to be a very useful tool indeed and, although its quite a long run (ten miles) down to the mullet grounds from her upstream mooring, its been worth the effort if only for the variety of swims that can be covered in a short space of time.
The fuel consumption of the little 6hp two stroke is nothing short of remarkable, and I would estimate that todays 20 mile return journey consumed roughly a fivers worth of petrol. I wish my Warrior was as frugal as this! 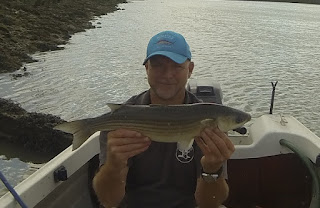 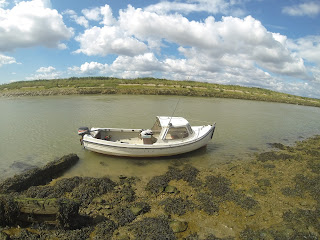