In the immortal words of  comedian Mickey Flanagan tonight Brian and me, were 'out out'.
My mate's been after a 'good ' eel ' for a while and  I've been watching the 'pointers' very carefully of late looking for an opportunity to get back to 'that' conger mark. Last night did seem to provide the ideal opportunity however, it would be a long session, in fact , an 'all nighter' was on the cards due to the times of the tide.
Ideally, I needed an ebbing tide in order to be able to position the boat accurately on the mark and with high water around midnight, the best fishing would come in the early hours.
We left the mooring under a cloudy sky at 8p.m and attempted to pick up mackerel on the journey with some limited success although, we were well stocked with frozen bait for back up.
The last of the flood was doing some very odd things , direction wise, when we arrived at the location in the fading light but ,with little wind, I was able to accurately 'park up' on the south side  close enough to get our baits in the 'zone' at least for a short while.
There was enough time for me to catch a conger of about 20lb before the boat 'swung off' ,as the effect of the ebb tide started, and repositioning was necessary. 'They' were 'in attendance'.
Again , the boat was easily anchored just yards from the target and ,as the tide picked up,by now in complete darkness, the conger 'kicked off' almost immediately.
I suspect that the flow dragged the scent from the baits  because bites were fast and furious.
Altogether nine good conger came to the boat with the best by far going to my mate in the shape of this beauty at 66 1/2lb- a new personal best . Two more slipped the hook so it was hectic fishing and quite hard work as these eels don't half pull back .
She was the only one to come on board, the others being freed at the boat side and ,with some good teamwork, and a clear deck, we managed to successfully weigh her in the shark sling , before getting the required 'snap shot'-not that easy as I had to get right up in the bow to get her, and Brian all in the shot. I need a longer boat!
The sling was also used to slide her ,albeit a little unceremoniously , back over the gunwale but, she swam down strongly into the depths leaving a thick coating of slime over everything she had touched in the boat.
Bites were extremely gentle affairs and fearing deep hooking, were struck quickly but I do think a close look  again at using circle hooks for these beasts would be useful- I seem to remember them working quite well in the past.
The fresh mackerel did produce takes of course, but equally impressive was the frozen cuttle although the stuff I'd brought along was quite old and a little 'high' Luckily Brian had some 'fresher' frozen bait.
We had intended to stay out over the 'lock out' period. until 8 a.m, and fish the dawn period over the reef with lures but, both feeling decidedly 'knackered' by proceedings (neither of us are getting any younger)we called it a night at about 3-30a.m and headed home with just enough 'half light' for safe passage. A very satisfying trip indeed. 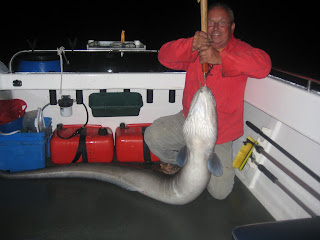