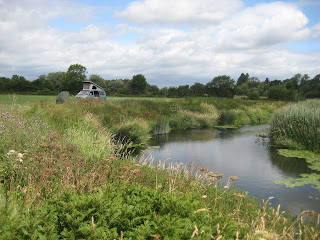 What better way to spend a week-end than 'wild' camp on an organic farm which has a mile or so of the Dorset Stour running through it's fields.
The only 'facility' provided on this 'site', if you can call it that, is merely a tap............in a goat barn, but this does mean that you can expect peace and quiet especially as the farmer only allows six units to use her land at a time. Definitely, my kind of camping.
Apparently , there was another customer somewhere, although we failed to even see them.
I have fished the Stour  some years ago for pike, and indeed once caught a twenty pounder, having been 'guided' into said pike's lair by a good friend from the National Mullet Club, so I suppose it doesn't really count.
On this occasion we ( my better half was also having a go) concentrated on basic coarse fishing tactics using maggots, bread flake, worms and corn for bait. 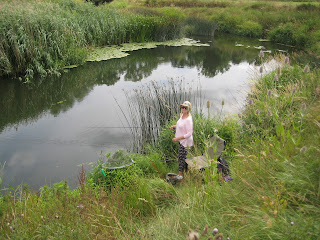 It's obvious that this part of the river receives little attention from anglers. Bank access is extremely difficult due in no small part to the extent of  the vegetation  but eventually, after some searching , I did find a swim that could be fished without too much 'destruction' although the farmer had given me permission to carry out bank side 'modification' if needed.
The Stour is subject to considerable flooding in the winter and the river at this time of year runs in a deep gorge, which  hampers easy fishing. There is also a considerable amount of weed growth however, we found several pools that would be well worth a revisit during the winter months for a pike trip when I suspect the majority of the vegetation will have died down.
I grabbed an hour or so as the light faded on the Friday evening and Immediately managed to wangle out four lovely roach all around the pound mark on bread flake. I've not caught roach like this for many years and ,regret not photographing them but it was getting quite dark at the time, and I didn't want to ruin the fishing with the camera flash.
Daytime fishing was less productive with mostly tiddlers-smaller roach, dace, mini chub and gudgeon making up the catch but, it was fun fishing and rewarding to see my wife honing her float fishing skills.
I did at one point bait up with a worm, and out came a perch of about half a pound, but those lovely roach from the first evening failed to show again.
We didn't see a soul , apart from the farmer, for two days and I suspect that another late summer visit will be paid to this rather special location hopefully to sample some more of its fishy delights. 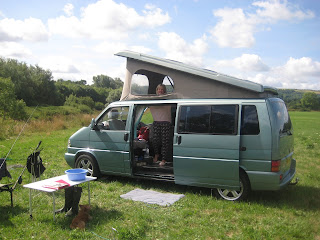 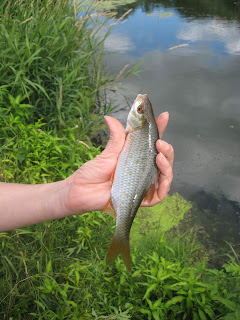 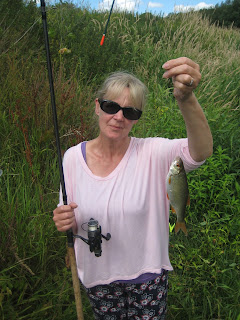