Well, big by my  'average' standards anyway.....but more of that later.

I made a huge 'boo-boo' last week by making a bad call on the weather, cancelling a trip out on what turned out to be a beautiful day and missing out on some really super blonde ray fishing. I know this because a  'learned friend' of mine made the right choice, unknowingly followed 'my' cunning plan, and scored 'big time' A lesson well and truly learned.
The inshore boat fishing can be a bit dull at this time of year, excepting 'blondies' on small tides, but I'd been given a 'hot tip' to try out  by my  'learned friend' who is rarely wrong. He also, rightly so, does not give out information too freely so, when he does come up with the goods, I tend to sit up and Take note(s)...literally.
One day I'll be able to return a favour or two....I hope.
The target mark was a fair way off shore and leaving the port ,as the tide dictated, at 9 a.m saw Dave and me suffering an uncomfortable ride out in the residue chop from recently subsiding winds.
Ten miles off and, as I'd started out with an under half empty tank and was running low on fuel, it was time to change tanks-not a problem ...........until the engine wouldn't restart...........which is a problem.
It did take me a while to diagnose the fault, and I was very close to 'calling it' and returning home on the auxillary engine.
No petrol was reaching the main fuel pump and this was caused by a one way valve in the fuel bulb falling out of place and blocking the line. Once I'd dismantled the bulb it was an easy fix and it looked fine but I made the decision to abandon our initial plan, turn back and choose an 'inside' mark.
Should the fuel line fail again, at least I'd be within easy reach of home if I had to use the 'wing' motor and anyway, the 'experiment' could wait for another day.
The fuel bulb failure highlights what a 'thin ice' we 'skate' on sometimes taking our boats out to sea. Taking a close look at the component back at home it was literally 'one of those things' that could happen to anyone  who uses a petrol engine, at anytime. How the valve came loose , only the devil knows as its still in 'new' condition. Whatever the case, it was a very satisfying feeling to be able to diagnose such a simple problem and fix it safely at sea although, I did secretly hope that we'd have to use my auxillary engine and prove its worth.
Would I go to sea without that little back up engine? Not likely.
'Phil's' marks are a line of numbers on mixed ground given to me when I first started out with my own boat and can be relied upon to provide steady, if not always electrifying, sport with a variety of species pretty much all year round. We chose to anchor on the 'cod' mark even though I've never caught, nor heard of a cod caught from here. Usually, it's 'Phil's skate marks' that throw up the odd cod. Confused?
Anyway , we settled on the nice convenient and safe mark just a 'stone's throw' out 'just in case' .
Bites were slow with the odd cat shark falling to our huge baits set for a 'hopeful' late cod. I did put down a small bait as well and caught the smallest, cutest dog fish I've ever seen. As Dave commented; ' Probably not that long out of the sack' 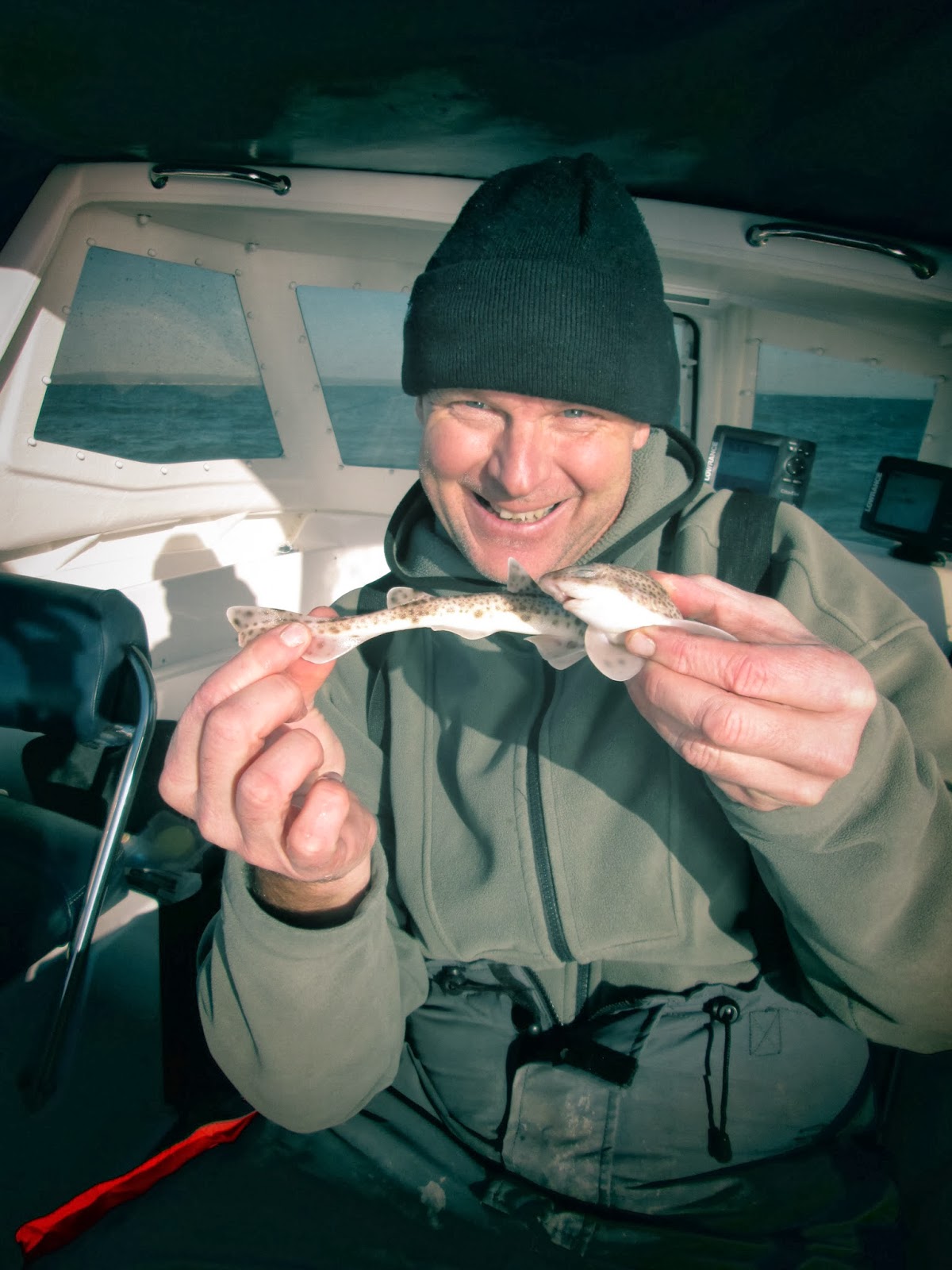 Thornback and undulate rays added a bit of variety until Dave hooked into something a bit more substantial in the shape of a conger of about 20lb giving him a good scrap in the process.
I decided to bait up with a big , eight inch strip of thick cuttle on my next drop and a classic slow ticking run on my old Penn Jigmaster developed into a solid hit and I immediately felt something a bit special on the other end.
A good strong fight with plenty of line stealing eventually saw a decent conger on the surface and a considerably larger specimen than any I'd seen before.
Having recently constructed a pair of hand gaffs in anticipation of a common skate trip to Scotland, I had it in my head to 'chin' the big eel and bring him aboard for a photo opportunity, especially as every conger I'd caught prior to this had been T barred at the side of the boat.
She came in quite easily but, as Dave had warned, twisted on the gaff and required a bit of muscle to control but it was worth the effort and we got a few pics before I slipped her back over the side none the worse for her experience.
Dave's got far more knowledge of big eels than me and at about five to six feet long,he estimated the fish to be over 50lb so i'll settle for the 'half ton' She was  heavy enough for me not to be able to lift her clear of the deck anyway-a cracking sporting fish that I really should target more often.
It would seem that these conger spread out off the usual reef marks at this time of year-perhaps in search of food. Several reports of eels were coming in over the radio today particularly in the region of the 'half way' mark . Generally the other boats were having a quiet time of it which seems to be the run of things at the moment, with many skippers talking about lifting their boats out for maintenance.'
It was also a day of mishaps.
Notwithstanding my own maladies, three boats were towed into harbour today-one poor charter boat losing its prop at the river mouth which could have been extremely problematical. 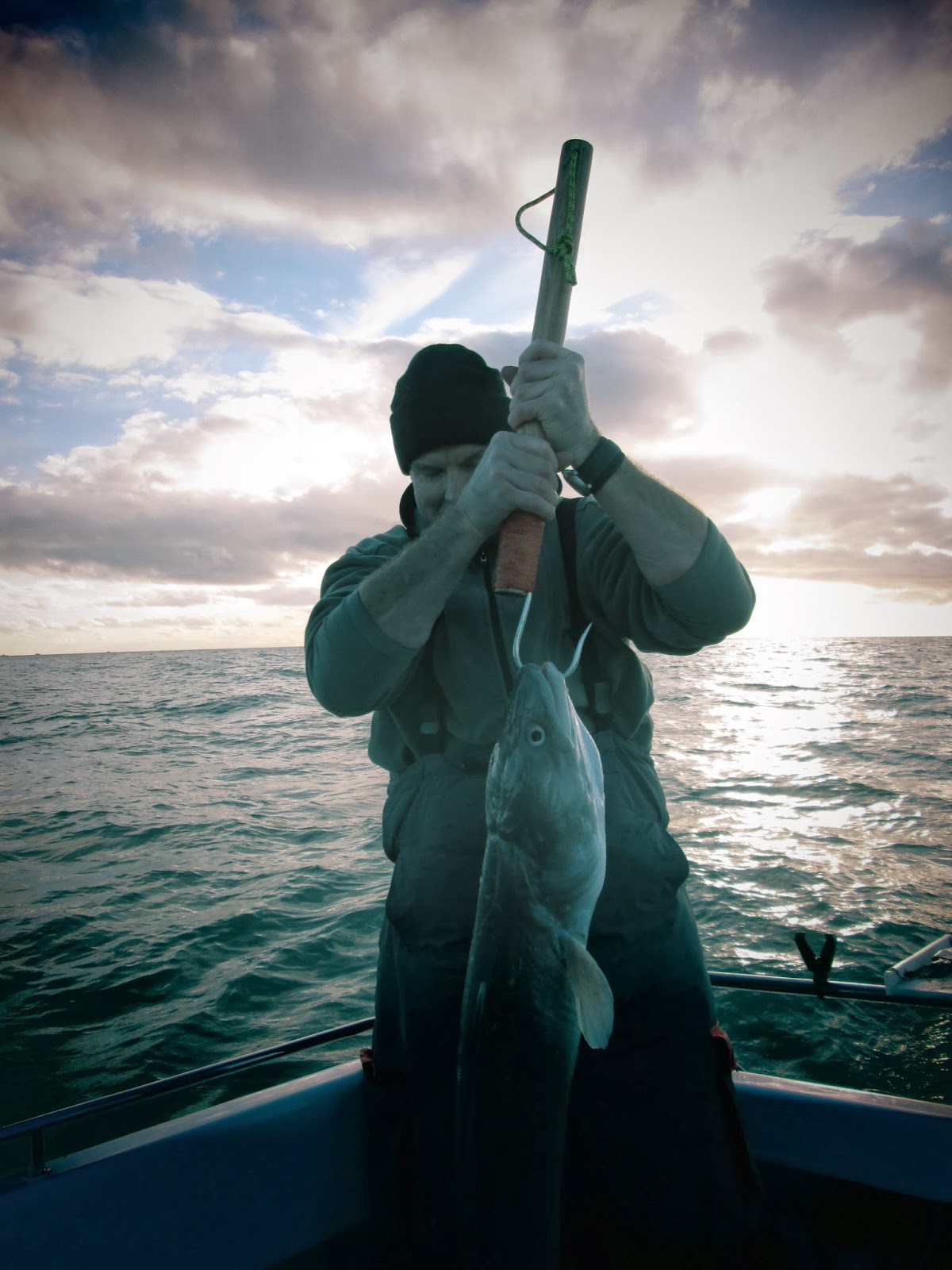 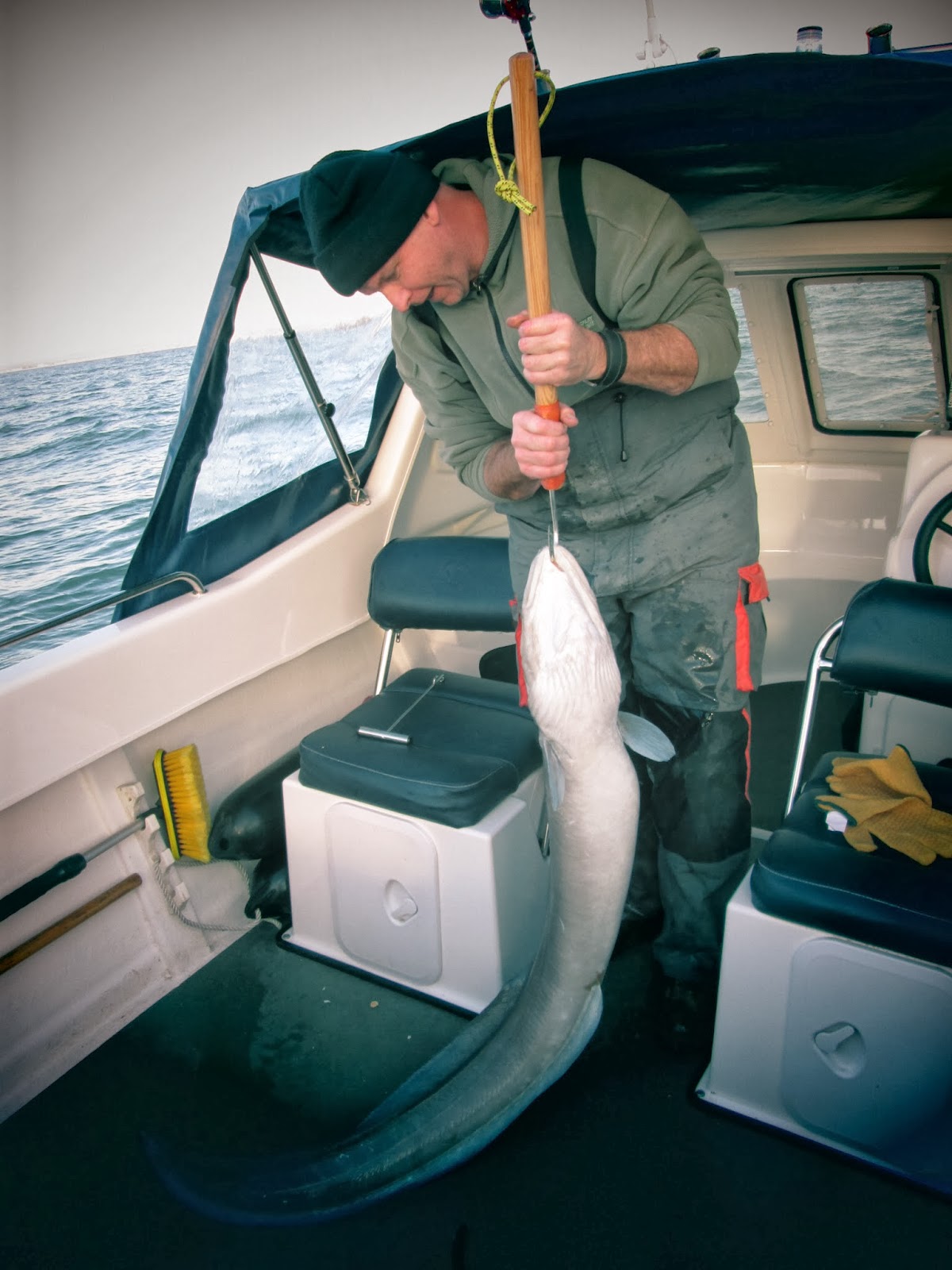 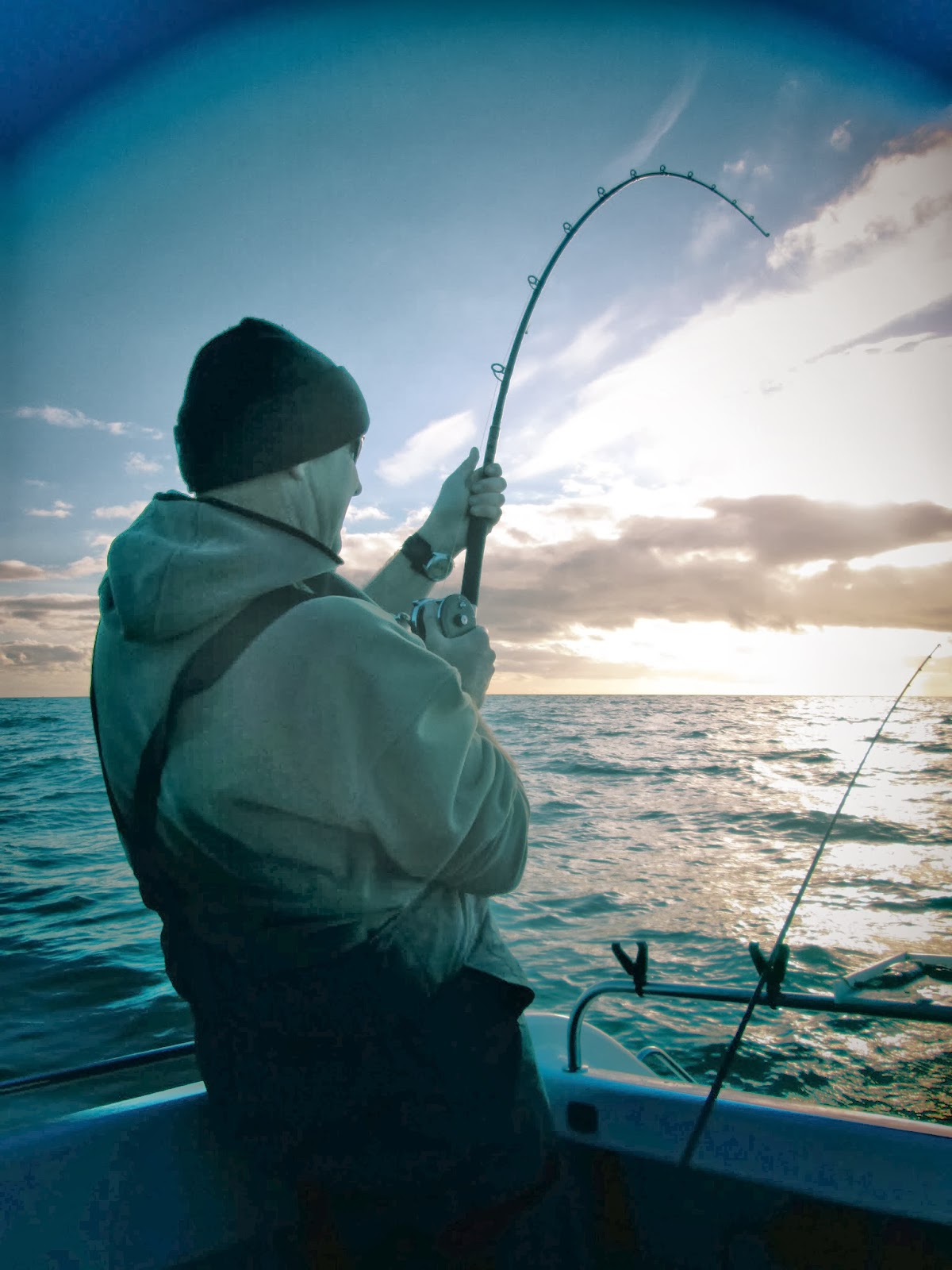 If you're reading this let me know. Comment on here or drop me an email with any questions at
completeangler@sky.com
Posted by Unknown at 12:59