My mate Brian was keen to have a bash at vertical lure fishing with soft plastics and as the water clarity 'out there' was still very good, I suggested that we give it a try  on the inshore reef marks again hunting wrasse. Of course, there was always an outside chance of stumbling across a bass shoal.
We did take some bait with us, just in case, but the general consensus of opinion locally is that we need a good blow to stir things up a bit, and improve the general bottom fishing for cod and whiting , which has been rather poor of late.
The  6m tide meant staying in the general area of a mark( #9) that actually benefits from the larger tidal movements, and still allows vertical fishing with s.p lures with a manageable (up to 3oz) nose weight.
I tend to avoid expensive jig heads, and opt instead for a plain drilled bullet on the short 2ft mono trace  tied direct to the braid. The bullet is fixed  against the lure with a silicone rig stop. The lure is rigged 'texas' style with a 'worm' style hook (lure guru Pete Cook recommends 'Nogales Monster Class 'and they're excellent) tied direct to the trace. The rig is fairly snag free but, as your fishing tight to the bottom on sometimes,  extremely rough terrain, losses must be expected. 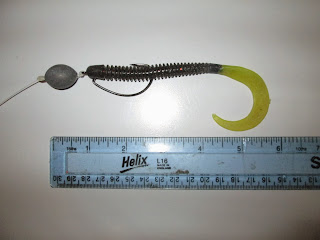 Rod and reel wise, I prefer a short bait caster style rod (mine's a 6ft 6in jigging rod rated at 40/60g) matched to a tiny Abu 4501 multiplier loaded with 20lb braid, though any light spinning gear will suffice. This outfit means that even the smaller wrasse, bass and pollack will give good sport, and it is great fun.
My lure choice leans towards 4-6 inch green or purple (anything dark) worms for the wrasse, moving to lighter coloured shad style lures IF a bass shoal is located . The bass , if feeding, seem to be less fussy but, size of lure seems to be important and if its possible to 'match the hatch', for example, if you know that small sprats are about, then do so with something about 4in long and silver or white.
When going for the wrasse, pinning the lure on the sea bed seems to be the way to go. I leave the multiplier out of gear with my thumb resting on the spool and am constantly feeding line to achieve this, retrieving should the depth reduce.
Rod action is so subtle that it's barely noticeable and the rocking motion of the boat actually needs to be counteracted sometimes . Prior to going out I rigged a worm bait in the marina and watched how it behaved. Even a slight 4in movement on the rod tip made the lure look very realistic and enticing.
I find that keeping the lure as vertical as possible underneath the boat enables you to hook more fish , and the nose weight should be adjusted accordingly.
When rigged with a heavy, say 3oz bullet weight, the rig appears to look 'wrong'. However, it doesn't seem to put the fish off at all and in fact, I believe that the disturbance caused by the heavy weight bumping the sea bed actually attracts the wrasse.
Again, with the bass, albeit if they choose to feed, the action seems to require less subtlety and in fact at times by simply retrieving the lure slowly, they can be induced to take up in the water column.
Wrasse takes sometimes need a little bit of time to develop, especially when using a 'shrouded' hook but the bass will more than likely hit the lure quite hard and will be hooked at the first indication.
As soon as we arrived at the mark it was clear on the sounder that pockets of wrasse were present and we hit them straight away and before long, lost count.
The wrasse came steadily throughout the day .Most were in the 2lb bracket, with the odd better fish, in a variety of colours and a couple of stray bass also turned up to add variety. A short move to my 'basking shark' mark gave Brian the biggest of the day with a new personal best fish of 5lb on the nose and indeed, this mark did seem to produce bigger specimens but in less numbers. 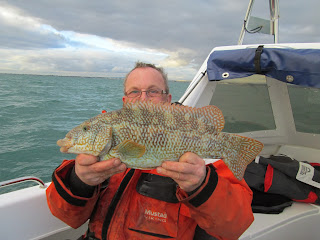 As darkness approached I did notice some bird activity over our original mark and suggested a return. On arrival, the sounder 'came alive' with a small dense shoal of  what was obviously bass and we were immediately amongst them taking a couple each , Brian got a good'n, before we lost the shoal after the second drift.
We continued to scan the area but to no avail and although,I'd been  careful trying to skirt around where I thought they were located when returning to re-drift but, I either spooked them, or they were moving extremely fast because no sooner had we located them, than they were gone-vanished completely.
By then it was completely dark and time to return home but we'd had a good session and Brian commented how much he'd enjoyed doing something a bit different which I found personally, extremely satisfying.
This sort of fishing does provide an welcome winter alternative to conventional bait fishing methods when conditions suit, and does have the capability of producing a cod or two as my marina neighbours brothers Clive and  Kim Hodges have recently proved.
Wrasse, probably because they aren't usually considered to be a table fish, are not everyone's cup of tea granted, but they do provide superb sport on light gear and, as Brian pointed out to me, are a bit more fun than hauling up doggies and channels whilst waiting for the conditions to improve for cod hunting.
Personally, I enjoy fishing for anything (doggies included) but will be curious to see how far the wrasse fishing can be pushed and just how big we can get them locally.Pete reckons they hang around all year and there are 'monsters' out there with 8 pounders being caught in nets. An 8lb ballan wrasse...wouldn't that be something. 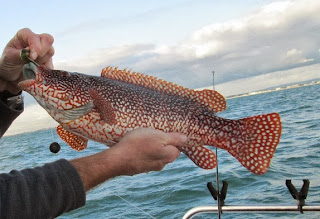