Today's plan involved a dual approach of both drifting with lures, and fishing at anchor with baits. One of my marina neighbours Mark, had inspired me with a tale of a 6lb wrasse that he'd caught, albeit on ragworm,  and that, as well as the fact that there was still a chance that the bass shoals would  be about, and it was a BIG 6m tide with plenty of (clear)water movement had me digging into my collection of soft plastic lures.
By the time I reached mark #6 ,my starting point, the ebb tide was well and truly underway, and  with up to 2kt drift speed I was soon looking to increase nose weights to keep the lures fishing relatively vertical. It was immediately clear from the sounder , that fish were present although in small numbers and, first run through produced a ballan of about 3lb on a Fiiiish minnow so , a good start.
Strangely, that was the only take on that part of the reef so I gradually headed west scanning the rocks and continually searching with my lures until I reached mark 9.
I've got a lot of confidence in this mark primarily because of its rugged nature, but also because I've picked up so much from here in the past and once again fish were showing on the sounder. To begin with I was getting a few bumps and a dropped fish or two but , a change to a darker green home brewed shad seem improve things with a couple more decent wrasse to the boat and a Pollack.
A change again to a very dark (purple)grub worm lure, and things really kicked off. The wrasse took the smaller lure much more confidently and I soon lost count of the chunky 3-5lb ballans that were coming up punctuated with the odd Pollack. 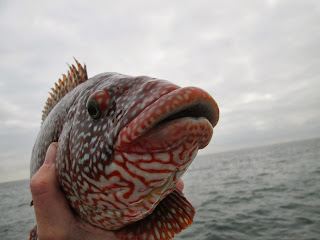 Occasionally, I managed to locate a  bigger shoal of 'something' that showed no interest whatsoever in ,whatever I literally, dropped right on their heads. Judging from what I've seen on the sounder before, and caught in good numbers, I'm pretty sure I'd located bass shoals but despite re-drifting them several times, they just were not interested in anything I showed them.
Perhaps the 8 degree celcius surface water temperature was having an effect on them.
I later discovered that a fellow marina bass enthusiast had located the same the previous day, but had to wait for the tide to flood before getting a take.
I wasn't too bothered with the lack of bass as these ballans really give a tremendous account of themselves fighting all the way up to the boat especially on the light baitcaster outfit I was using.
Despite my continued enthusiasm at (trying) to catch them, I'm sure I'm not alone in thinking that, given their undeniably handsome good looks, sometimes, our beloved 'labrax' can be a bit lacklustre in the 'fight' department. I can't comment too much on their eating qualities because most of mine go back,but the words 'overrated' and 'fashionable' spring to mind.(That should stir a few of you up)
Eventually takes on #9 slowed down so I moved west yet again to some really interesting ground near #7 and found my colourful friends in attendance yet again on the small worm lures this time getting a really good fish at 5lb 12oz- a new personal best for the specie. That's a 24in landing net frame. 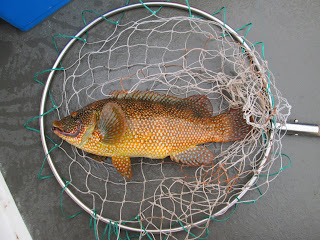 As the big tide reached its slack low period I noticed , what at first I thought was a basking shark fin in the distance. I must have sharks permanently on my brain because I immediately shot over to investigate only to discover that the 'shark fin' was an abandoned black pot buoy marker uncovered by the big tide.
Quite by accident , on reaching the buoy I spotted a flash of green on the sounder , had stumbled across yet another piece of interesting ground to add to my mark list and yet again, it produced a couple more nice wrasse.
As darkness fell I decide to call a halt to the lure fishing, it had  been great fun, and head over to #28 to anchor up with baits and wait a couple of hours for the tide to flood enough for me to be able to get across the bar safely.
I really enjoy night fishing and always soak up the atmosphere when I get the chance to do some. Once the tide had turned a few decent sized whiting took my small baits along with the inevitable dogs and fat pout but my big strip of cuttle was pretty much left to soak, untaken. Still, it was a pleasant way to pass the time and I soon had enough  whiting for tea, and water over the bar to get home, making good use of my spotlight to safely navigate without tangling with any hidden fixed gear on a very black night indeed. 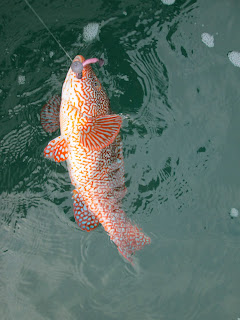