This really is a beautiful stretch of river  with an abundance of wildlife to entertain the angler on a slow day......and today was a slow day.A barn owl distracted me with visits throughout the session, as well as kestrels and kingfishers, deer and some very docile highland cattle.
Both Dave and Paul had recommended the stretch ,on one hand for it's history of large pike( Dave's had a twenty or two)and secondly for some decent, recent match catches, suggesting the presence of  prey fish.
I hopped my roach baits half way to Washingham but only one pike was landed-a tiny specimen not much bigger than a couple of pounds, which took a shine to my roach bait on the retrieve.
I did have a bit of fun jigging a lemon shad right under the near bank which Induced a pike of about 5lb to attack several times , and not hook up but, but biggest disappointment of the day was losing a sizable fish, which took whilst I was moving my bait net, causing me to sprint about 100yds to the rod(highly irresponsible) and then not tighten up properly. It was on for a few seconds, and I even got a look,but my fumbling trying to reach the landing net must have momentarily given slack, and she was off.
Stayed in the still, sunny conditions until dusk, by which time silver fish, and bream were topping,having fished the majority of the ebb and the whole flood, which wasn't too taxing this high up the river, until slack HW.
Should've banked more, but that little pikelet saved a blank. 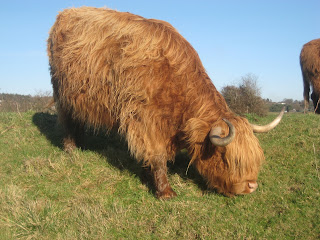 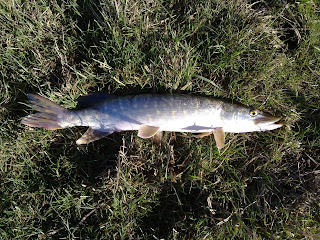 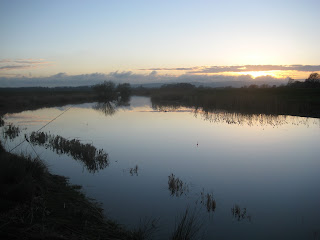