Fished with Andy on the top section at Ham today between 11am-5pm thus completing exploration of the whole Houghton Bridge and District stretch.We covered the bulk of the ebb and finished at dusk on HW on a gentle 4.9 m tide and it rained, at times quite heavily, all day long.However, the mild temperatures made the session a little more bearable despite both of us being wet through.
Andy was first with some action with a 5lb pike taken in mid stream on a trusty sardine, but I had to wait until the end of the day, and the final port of call at the sluice channel  entrance, before my  roach were taken firstly, by a gargantuan pike of about a 1lb (note comedy picture),shortly followed by a better fish of 7lb 12oz (scar left flank).It would seem, with my own and Phil Jones' previous captures, that the sluice swim is something of a holding area.
Once again, persisting when other lesser (sane) mortals would have thrown in the towel,paid off.Great for Drew to finally get a fish after suffering a series of blanks, and also great to catch, as a pair, more than one pike, even if they were pretty small.
It will be interesting to see how the rain affects the state of the river.........I fear the worst. 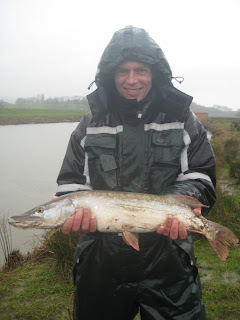 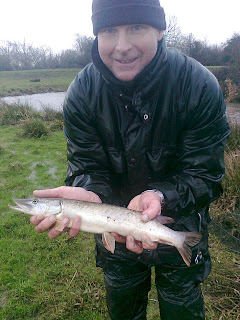 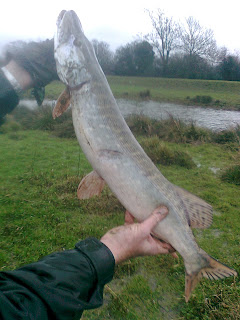 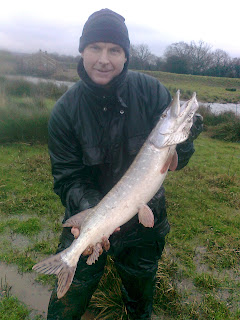