Pretty tiny I'm afraid.A whiting about the size of a mackerel bait but that's not the point. it's a fish.
The pike have continued to elude me and I've had three more blank trips In December to the Arun at Ham corner, and The Adur at Streatham and Betley where i couldn't even catch a live bait.That's ten blanks in a row and the most difficult period of river pike angling i've ever experienced.On the Betley trip another angler did take two pike including a double, but he was 'cheating' with live baits. I'd be more than happy to cheat if i could catch some wrigglies.Also on the same trip I came across Richard Donnelly, an ex NMC member and mate of Ben's, and now a keen barbel angler with a few taken from the Arun.
Anyway today I took Andy out on the boat for a first proper deep sea trip. We anchored up at Black Ledge and fished for a few hours but that whiting was the only fish to the boat on whole squid. It's a significant little feller though as It's MY first capture on the boat. Hopefully, things will improve.Fishing was generally slow although we did get a few knocks,probably small whiting, nothing else came on board . Rusty had similar luck, at the same time, a few more miles out at the Shirala.He took the picture of my boat on his way back home.
It was not however, a wasted trip as i got a chance to test out some proper anchoring and retrieval using the 'Alderney' method, and also play with the radio and GPS. Everything went well until we came back in to the river mouth where I trashed my prop on the shallows, having left it far too late to come home.Ouch....that hurt! 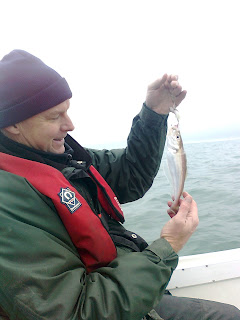