It's been two months since I've caught a pike and , with the recent rain,a long wait for the rivers to get back in condition.Having taken a 'look' at both the Arun and Adur yesterday,and finding them both to be in a fair state, I decided to take a leave day and head for Ham corner this morning.
The tide had just turned at the top, and the water had good clarity, assisted no doubt by the low temperatures of the past few hours.Wind was from the east...and a bit chilly.
I started with both rods near the sluice entrance and , on the first cast,after perhaps 20 minutes,one of the floats sailed away, the alarm sounded as line was Immediately taken at a rate of knots, and my paternostered roach had well and truly been 'mullered'(where does that phrase emanate from) In a very aggressive fashion, typical in fact, of a hit on a live bait.
Plump, heavily leeched fish this one, and exactly the same weight as my previous Ham double at 13lb 12oz.It's entirely possible that its the same fish however , from memory, my November fish, taken about 150yds downstream, seemed longer and leaner.In any case I'll never know,(do I really want to) as I photographed it on the opposing flank.
Another 'unknown' Is whether or not this fish would have taken my usual 'drowned' sardine.It had obviously recently been in quite a dormant state , and I'd like to think that the roach 'triggered' it into action.Dave calls live baiting' cheating'.......I call it 'giving yourself the edge'

Interestingly, the pike didn't seem to be bothered by the 'peaty' coloured water that was flowing out of the sluice.My bait was 'buried' right amongst it.
Unfortunately, that was the only take(I did expect more), and I packed up at 2-00p.m having worked my way downstream to the 'November' swim , and ended the session with  a final half hour return to the sluice, just in case.
Thank goodness I've finally caught a pike..............even if I was 'cheating' 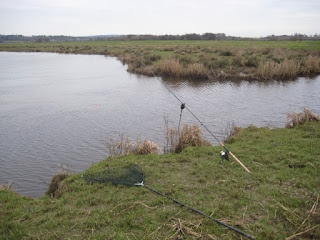 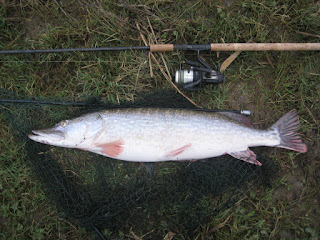