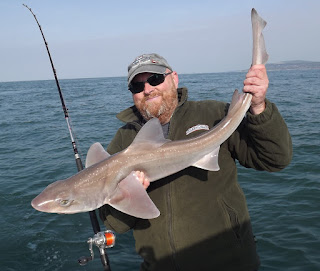 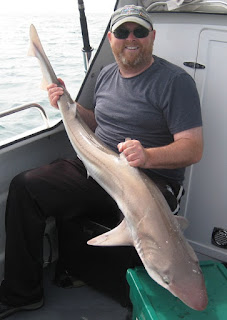 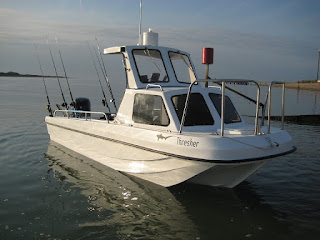 Wayne's Flyer
I've fished with Wayne on several occasions but this was the first chance I've had to have a run out in his newly built Wilson Flyer which he runs out of Eastney Cruiser's Association  in Portsmouth.
The target was to be spurdog- a specie rarely seen in our area nowadays( I've yet to see one myself) despite being a popular catch to charter boats in past years.
Dave tells me that in his boat fishing days in the 90s they were a regular part of a day's catch and quite why they have virtually disappeared is anyone's guess.
We fished an area at the back of the I-O-W , in itself of great interest to me, but the target specie chose not to put in an appearance however, some nice hounds and an early tope saved the day.
As postscript to this entry Wayne has since been out drifting for thresher shark from his boat and succeeded in catching on four out of four attempts- a remarkable achievement indeed-well done that man.
Posted by Unknown at 03:13