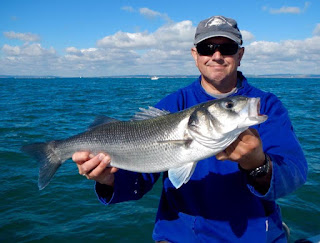 A six pounder for Clive

I haven't used the sea boat for far too long and have been itching to get out since returning from my holidays. Today was to be that 'return' trip until Clive asked me to join him on his boat for the day when we arrived at the marina.
It always makes for an enjoyable day afloat with Clive and today was little different. Our objectives were the same- to fish with lures for bass or wrasse but, the fishing was challenging.
We did get plenty of small wrasse and half a dozen or so bass, mostly captured by my skipper I hasten to add. I suspect, having been 'away' for so long I'm somewhat out of practice and will have to regain my 'touch'.
Best of the day was the six pounder pictured above in fine autumn fettle-a lovely fish.
Most of our regular boaters have been concentrating on the plaice fishing which has been consistent and thrown up the odd exceptional fish-Spirit Of Arun reported a five pounder this week.
There are also bream showing on the reef marks to a reasonable size and the first of the cod have also arrived both at sea, and from our beaches. Clive himself bagged a nice brace from a local piece of shingle a few days ago.
Also reported by fellow Warrior user Steve Wells, are some fine shoals of mackerel however, it would seem that as the winds veered around to the eastern sector, they mysteriously disappeared.
'When the wind's in the East.......................'
Posted by Unknown at 14:29