I'd missed a couple of good days mid week ,weather wise, due to work commitments and with the  forecast today not looking that brilliant, I waited until after breakfast before deciding whether or not to venture out. The sea state didn't look too bad from the kitchen window, and the winds were set to drop around lunch time, so I took the plunge.
On arriving at the marina , Martin called me over and invited me to join him and Neil on his boat so , as we were intending to fish the same mark anyway it made sense to jump on board. In addition, one less boat on the mark would attract less attention .
We started by dropping the pick on a piece of inshore 'ground' and concentrating on filling the live bait tank with whiting. It took some effort but,with twenty or so 'wrigglers' safely on board we headed to the reef just as the tide was topping out and sent out our float rigs.
Live baiting for bass with a float is a very exciting method as is pretty much any fishing from sharking to mulleting which involve watching a lump of brightly coloured balsa wood or plastic. 'Pleasing in disappearance' is the phrase that springs to mind and we didn't have to wait too long for our floats to disappear.
Neil opened the account with a splendid bass of about eight pounds and from then onwards we pretty much had a hook up on every drift- Martin skilfully positioning 'Blueprint' perfectly each time around.
At one point both Neil and myself had a double figure fish each in the boat at the same time which made for a terrific photograph and, along with the sizable bass, plenty of 'scrappers' hit our baits not always, it has to be said, successfully connecting.
We soon lost count of the fish caught but I'm pretty sure I personally approached double figures with, among others, a nice fish around 7-8lb and two doubles of 11lb 6oz and a new personal best at 12lb 9oz . In total four double figure bass came to the boat and we all had a share in the action.
Once again Clive and Kim on board their Orkney joined us on the mark, so I really was surrounded by bass ' superstars', and also had considerable success boating some very creditable fish indeed .
Thankfully, our two boats were left alone to enjoy the fishing for the rest of the day without encumbrance which is something of a rarity although, I suspect this situation will not endure. In a few days the commercial bass ban will be lifted and  soon enough, word will get out. Hopefully it won't be too long before the bass spread out , and become consistently catchable in other areas.
So, a fantastic day afloat with excellent company and a good start to the bass season. Let's hope it lasts. 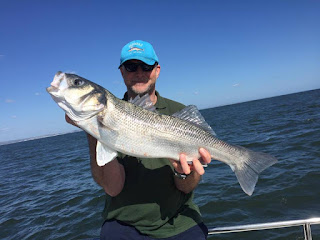 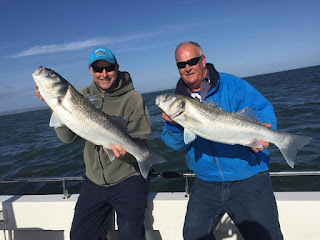 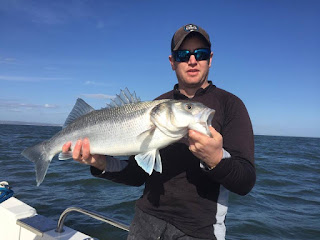 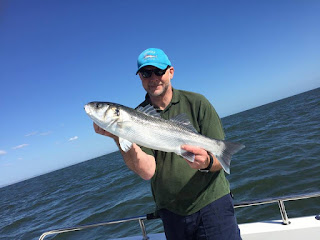 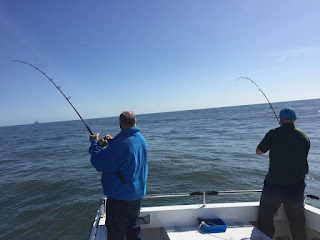