Finally, the strong winds that have been a major feature of this winter season abated and gave us  a chance to get out to sea in the boat.
Brian was to join me , and the 'plan' was to take advantage of the small tides and head off to the sand banks in search of blonde ray but unfortunately, my main engine completely failed to start.
No matter how much I tried to coax it into firing, It would have none of it and it appeared to be 'flooding ' quite badly.
Luckily marina neighbour Alan was heading out on his own so , rather than lose a day's fishing, I suggested that Brian jump on with him, whilst I stayed behind to try and source my engine problem.
A fresh set of plugs ,  a bit of patience, and eventually the motor 'staggered' into life but Ideally I needed to give her a good run out to sea to regain my confidence in her.
Brian and Alan were on a nearby mark so after waiting for the tide to flood I decided to join them thinking that, if I needed a tow home, they'd be close at hand.
I anchored up at the 'half way' and send down a big cuttle bait on one rod, and a squid strip baited 'live bait' rig on another. I only had a couple of hours to fish.
In short , bites were few but I did catch a rather nice conger and also a half decent undulate ray on the live bait rig-in fact it was a new personal best for the specie at 19lb 8oz!! The picture isn't up to much but alongside the boat's fuel tanks, at least It give a bit of perspective to the ray.
We do seem to do very well for undulates in our area and it has produced several fish over the 'official' British record which were all returned to the sea.
The engine behaved impeccably and has since restarted every time 'on the button' even on the coldest of mornings so it appears that the problem has simply, 'gone away'. 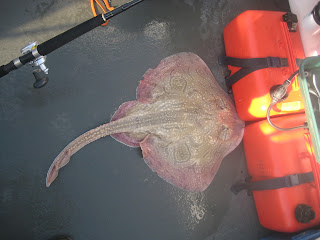