Following on from the successful river pike trip of two days ago, I spent yesterday at sea on board Brian's Orkney Fastliner in search of cod.
The skipper hadn't been able use his boat for a while so there were some minor mechanical issues that needed sorting before we could set off, but eventually we arrived at our chosen location. Unfortunately, the target specie didn't materialise ,despite us both fishing a suitably big bait, complimented by a live bait rig on a second rod each. A procession of pouting, whiting with the odd dogfish thrown in for good measure did show along with a welcome thornback ray but in general, the fishing was difficult.
Of course, this didn't matter in the slightest as a day out with Brian on his boat is always entertainingand when we catch a few fish, which we normally do, its something of a bonus.
Today Dave and me returned to the river, which we found to be in excellent shape and ,assisted by a small tide , we followed the flood upstream.
First stop was at a swim which , according to Brian, who has fished the river pretty much since the day he was born, is known as 'The Silent Pool'. With little wind to speak of, we anchored the boat 'mid river' and fished two baits each towards opposing banks on float paternoster rigs.
I've recently purchased a new pike 'stick' in the shape of a 10ft, 3.5lb test curve 'Loch Tamer' custom built by Dave Lumb. This formidable weapon is more than capable of lobbing out a large whole mackerel bait complete with 3oz lead whilst my 11ft 2.5lb P-2 rods, also from Dave, remain in use for standard piking duties.
It didn't take long for the first run of the day to materialise to my new rod in the shape of this lean, one eyed pike of 12lb 8oz which was in otherwise, excellent shape. 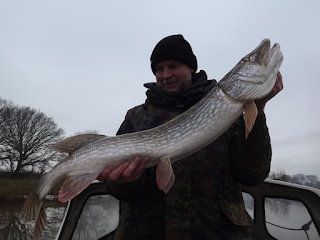 The 'pool' produced no more action, so a move downstream to a reed lined bay was undertaken. This time it was the sardine that got 'snaffled' by another lean pike weighing in at 16lb 4oz. Not a bad start at all!! 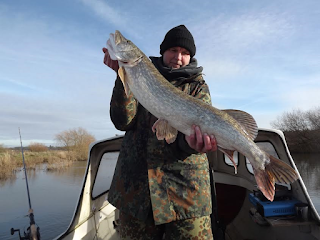 Following another short jaunt, we arrived close to an area that's been very productive of late and, as Dave had first choice of swim, decided to place his mackerel bait tight to the bank in a spot of slack water .
Sure enough pike were present, and it didn't take long before the float slid across the surface and glide away to the depths resulting in Dave being connected to an above average fish.
When the scales swept round to 22lb 3oz, I'm not sure which one of us was more pleased. A splendid fish indeed and very satisfying to even up the share of the action.
If we'd stopped fishing at this point, it would have been considered an excellent day's river piking but there was more to follow. 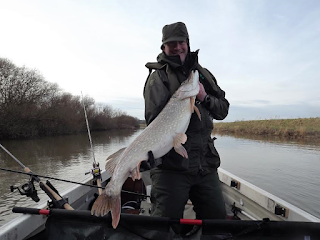 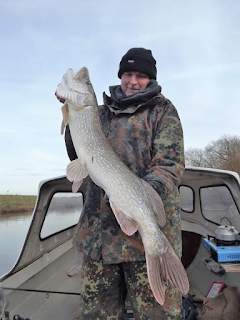 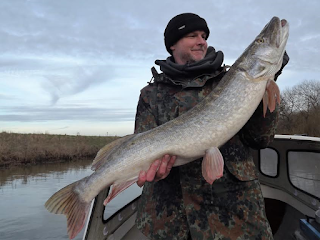 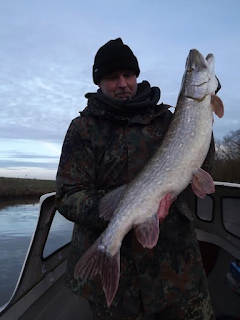 Quite an amazing run of fish complimented by some excellent photography on Dave's part.
The 'twenty' although caught in fairly close proximity to both my previous fish of a similar weight, is a different pike which is terrific news. Quite why so many good pike are congregating in this area is , of course, something of a mystery, but its quite possible that they are assembling prior to spawning which, because of the relatively high temperatures we've experienced this season, may be taking place a little earlier than usual.
One thing is for sure, this little 'hot spot' won't last. We've discovered gatherings similar to this in the past on the river and they are usually short lived. River pike are a 'wandering' breed. 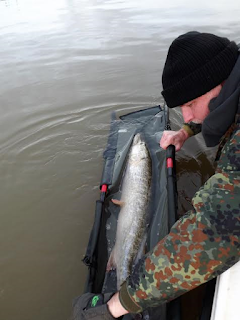 The superb 'sladle' in action.