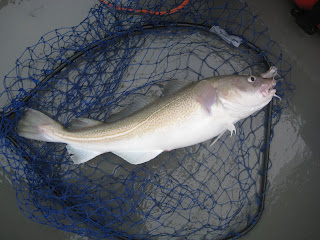 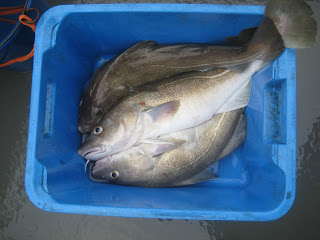 The recent consistent strong winds have played havoc with our local inshore fishing in that we simply cannot get out to sea in our boats. For many of those that fish for fun, it can be slightly irritating especially if  paying to 'park' a boat .
From a personal perspective, being an 'all rounder', I love the vagaries of the British climate and  relish the chance to get out and play in the surf and chase bass, or switch location to the river and hunt pike.
However, spare a thought for the professionals -the charter angling fleet and small boat commercial fishermen in particular whose living can be severely affected by the weather and, at the best of times ,can be described as 'precarious'. At the moment, they're having a hard time of it and have my utmost sympathy.
Today a rare opportunity presented itself to get out in the boat as the winds had abated, at least for a short time.
With colour in the water , the option to fish lures for bass , which can be very productive at this time of year, was a non-starter so I decided instead to keep things very simple, head for just one mark ,drop the pick for few hours and fish baits.
The 'half way' mark was selected , the target was cod and the bait choice was whole baby cuttle mounted on a 6/0 pennel rig.
As well as the usual run of 'fodder' fish-pout, whiting and dogs , four codling to 7lb came to the boat and I was actually quite pleased with the result, especially as it stocked up my freezer with some fresh fillets of prime fish.
I did consider staying out over the low tide 'lock out' and fish into darkness but, unfortunately I hadn't brought enough bait with me so had to head for home after an all too brief, albeit productive, session.