Once again, its the time of year to climb into the 'chesties,' and get out in the 'suds' .
This has to rate as one of my favourite forms of fishing. Simple , uncomplicated yet challenging in the extreme and so physically demanding that, at times, its only possible to endure a couple of hours fishing in a session.
Recent winds have been consistent, and strong with some heavy rainfall which means that both boats stay permanently parked on their moorings as its far too rough to go out to sea, and the river is 'up' and coloured so the pike will have their heads 'down'.
No matter. Its also the best time of year to hunt for big bass and, our local beaches have an excellent track record on this score.
Its been a few years since I pulled out that first double figure bass from the surf and each season I fish the odd trip and usually get one or two good bass for my efforts.
Tonight conditions were just perfect for one of my favourite hot spots and , true to form, it produced the goods at almost exactly the 'prescribed' time resulting in one of the most satisfying fish I've caught this year-the 72cm specimen pictured below. 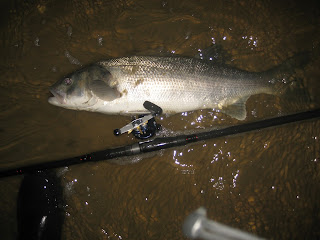 Bait was a whole squid mounted on a 6/0 pennel rig and the bite was a firm , unmissable 'thump' followed by a dogged and thoroughly entertaining fight on my light 3oz 'estuary' outfit. Cleanly hooked, the  fish was led back through the waves and successfully released following our brief encounter. In a word........'superb'