Following on from the bass capture, I fished three more consecutive tides with Simon but with little success. However, my beach partner did score a superb nine pounder on a subsequent tide, that I was unable to fish, to finish the flurry of almost perfect surf conditions that we've been experiencing.
The following week-end I nipped out in the river boat for a short pike session and managed one very skinny jack from a swim downstream of our mooring, on a paternostered sardine.
Surprisingly, despite some quite heavy rainfall , the river remains in reasonable condition, though I suspect that this will not last forever, and we do need to take advantage of this situation while we're able.
Dave has struggled of late with the pike fishing suffering a run of about half a dozen blank sessions so, It was high time that he caught a decent fish from the boat. Of course this is just  bad luck because, when we're fishing together, we're  using the same baits and rigs in  the same spots so if a pike is nearby, it's something of a random choice which bait it will pick up-if any.
The week-end of the 21st -22nd was set aside for the task at hand and the tide times allowed us to venture upstream to , hopefully, some productive areas.
On the Saturday we elected not to venture too far, as we were low on usable fuel (we forgot to stock up on two stroke oil) so we chose to target an area where we'd caught several years before in Dave's former craft- a 'tinny'.
Just one 'pike' run ensued and thankfully it was to my mate's rod- a very nice pike indeed of 16lb 6oz, and a splendid end to his run of blanks. 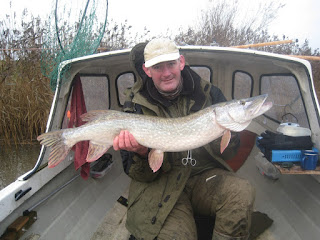 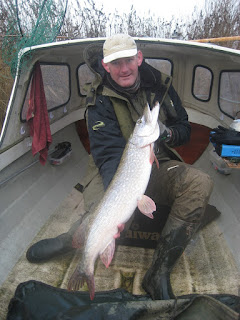 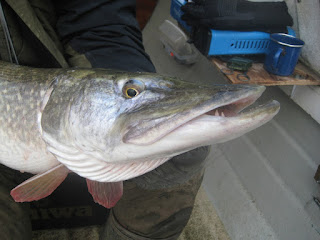 The fish fought extremely well testing Dave's ancient 'wooden' spinning rod and 'Gildex' reel, both of which handled the battle with ease. Actually, the rod is a rather special Hardy LRH which was a sort of 'Rolls Royce' stick of its era. 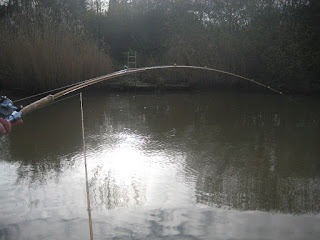 Shortly after , a rather odd thing happened. Dave's float started to move smoothly downstream so he tightened up to...................of all things ...............a bass! A fish of about 4-5lb and several miles from the sea. Although I've never seen this before myself, this is the third bass Dave has had take his pike baits well into fresh water over the years. The fish was a little the worse for wear but obviously feeding quite happily and was successfully returned. 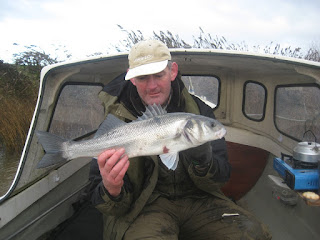 The following day, with plentiful fuel stock on board, we ventured a few miles upstream to the scene of my recent success with that brace of doubles.
Minutes after my sardine had settled next to a sunken tree, I experienced a dropped run but the pike wasn't giving up and a few minutes later ,a second attempt resulted in a upper single to the boat to start the day.
Following a short move downstream a very delicate, slow take to Dave's rod resulted in a double of 18lb 4oz for my mate and before we'd had a chance to take the picture , my multiplier ratchet screamed signalling more pike action.
Dave kept the big pike in the net whilst I unhooked mine, a smaller 'single', at the boat side and we managed to get our pics after all. Another very fine pike indeed. 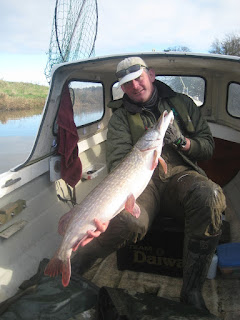 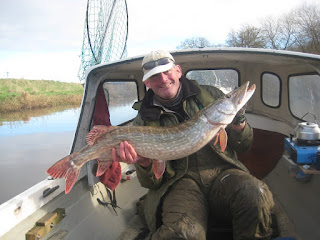 But this wasn't the end of the feeding spell because minutes later, and before I'd even had a chance to re-bait my rod,my second outfit produced another single figure pike-my third of the day.
It's not unusual, in pike fishing, to experience a run of takes like this in a very short time and its  happened to both of us several times in the past. Quite what triggers individual pike to feed, sometimes a considerable distance apart, is one of fishing's great mysteries and long may it continue to be so.
So , two excellent day's pike fishing and, with enthusiasm now fully restored, lets hope we're able to get a few more trips in before the winter floods kick in. It's interesting to note that these past couple of days have seen the first frosts and 'cold snap' that we've experienced this winter and 'traditional pikers' (Dave and me do not consider ourselves of this ilk) usually wait until these conditions occur before starting their pike campaigns.
Personally and, as I've proved in the past, I think this theory is a load of 'hogwash' but, who knows. 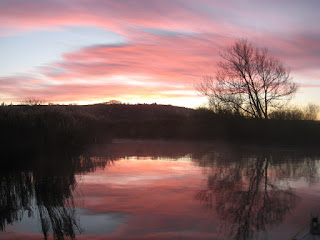 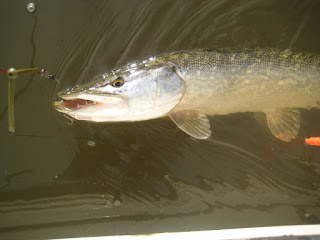