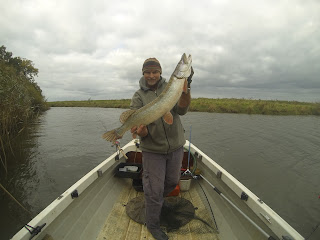 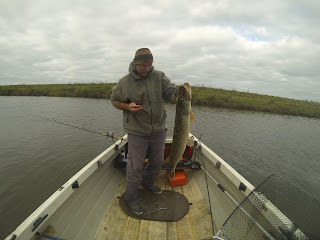 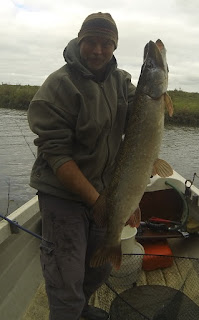 The boat gives us unlimited access to the tidal reaches of our local river and, providing that we don't anchor above the high tide mark, we are able to fish without permission of the respective landowners. This opens up a great deal of water ,some of which would rarely see an angler's bait and, as every pike enthusiast knows, our favourite predator thrives on neglect.
However, lets not forget that pike fishing on tidal rivers is always going to be challenging and, in this respect, ours is no different.
Today I decided to head a few miles upstream and into territories that are not controlled by any of our local angling clubs at least, they haven't been for several years. Its a remote area that I've fished in the past and one that has produced fish,being loaded with bank side features. Water conditions are superb at the moment with the river running comparatively clear(for a tideway) and 'freshened' occasionally by the short periods of rain we've been experiencing of late. It really is a time to make the 'most of it' before the 'real' winter weather arrives to spoil it all.
Tucking in to the first swim at mid morning, and literally within minutes of dropping in my roach bait, the clicker on the multiplier sang its song. The run came so quickly that, foolishly, I hadn't even had a chance to assemble the landing net and I didn't even see the float disappear. I bent into a decent fish ( I would estimate it at a very good double) but the pike tore off so powerfully it snagged me in a sunken tree just a few feet from the take zone. I kept the tension on whilst I messed around trying to sort out the landing net but to no avail. The pike slipped the hooks and I wasn't best pleased although thankfully, I managed to successfully retrieve all my tackle.
Feeling slightly dejected I opted to stick it out in the same spot and, although the 'lost fish' swim didn't produce, the second rod, fished upstream of the boat. soon provided an eight pounder , again on a roach bait, to lift my spirits somewhat.
Proceedings went a little quiet following that so I elected to carry out a short hop, a few yards downstream and tuck the boat in some slack water among several overhanging trees. The river widens here and the flow becomes barely noticeable making for comfortable fishing conditions. The stretch ( I moved a couple of times) gave me a brace of low doubles (10 and 12lb) on the roach baits and a repeatedly dropped run , a lightly hooked jack pike, on a joey mackerel to make for some lively fishing before the light faded and I was forced to make tracks back to the mooring.
A good days piking.
Posted by Unknown at 01:05